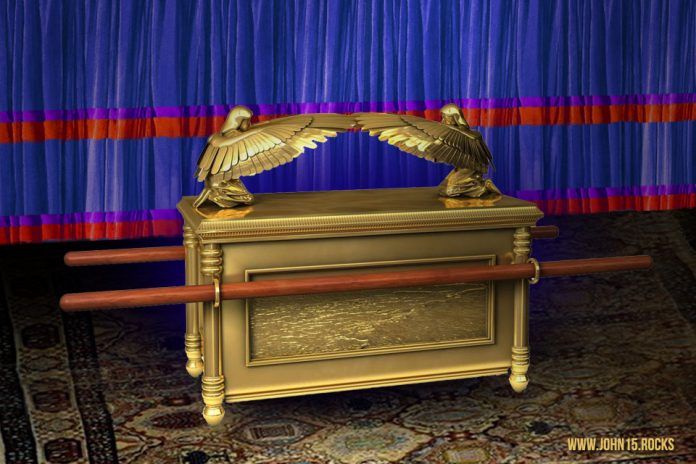 What is the Ark of the Covenant?

Ark of Covenant (אָרוֹן הַבְּרִית) is “Arca” in Latin meaning a big box. It is a gold-covered wooden chest with a lid cover and cherubims. Legend has it that it contains power—and whoever possesses it has access to it.

After wandering in the wilderness for 40 years, God’s chosen people, the Israelites reached the promised land around 10 BC. The Ark rested in the First Temple of Jerusalem for 400 years. It was constructed during the reign of King David’s son, Solomon, completed in 957 BC.

Inside the temple. a special inner room separated by a curtain called “Kodesh Hakodashim” or “Holy of Holies” was created for the Ark. Only Aaron and his descendants, the Levites, or High Priests, allowed inside the tabernacle.

Anyone who enters it may die except the High Priest of course. However, if the priest has unconfessed sin, he too will die. [Yoma 70a; Kohen Gadol]

What is the Ark made of?

God instructed Moses on Mount Sinai during his 40-day stay in the mountain. He showed Moses the pattern for the tabernacle and furnishings of the Ark to be made of Shittim wood (probably an acacia). The size of the cherubs is speculated. (Exodus 25:10-11)

Design of the Ark

It’s approximately 52×31×31 inches, gilded entirely with gold, and a crown or molding of gold around it. Four rings of gold attached to its four corners so it can be carried around, and these should not be removed.

A golden lid or cover called the kapporet or “mercy seat” with two golden cherubim placed above.

The Ark is sacrosanct

The “Arca” is a simple structure yet untouchable. It is where God’s presence was; thus Holy and perhaps the most sacred relic, if ever found. It can only be carried by the pole attached to it.

Touching the Ark was a violation of the divine law

Uzzah and his brother drove the car that carried the Ark. He reached out and took hold of the Ark, because the oxen stumbled. The anger of the LORD burned against him. God struck him down on the spot for his irreverence (2 Samuel 6:7).

How the Ark was kept securely

The Ark was always covered by skins and cloths, hidden even from the priests who carried it. When stationary, it was held up by poles so it wouldn’t touch the ground inside a tent. Even the high priest was forbidden to be beside it, unless during rituals.

When the Israelites established their presence in Canaan, it was first brought to Shiloh. King David later took the Ark to Jerusalem, where his son King Solomon built the First Temple of Jerusalem in 957 BC to enshrine the Ark in Jerusalem. (Joshua 1–24)

What’s inside the Ark of the Covenant?

The supernatural power that went through the Ark

The ark and the Third Temple of Jerusalem

The ongoing peace negotiation in the middle east forged by America’s President Trump is securing the building of the third temple. The temple institute may create a replica of the ark as a political statement, and say, Israel has fully resurrected.

→ Rebuilding of the Third Temple update.

Is the Ark of the Covenant still relevant today?

Around 625 BC, Prophet Jeremiah wrote the ark of the covenant would be forgotten. It won’t be missed or another one made (Jeremiah 3:16). As a relic, people will surely worship the Ark. Perhaps the reason God made sure it remains hidden.

After Jesus died, the curtain tore, which meant we’re free to come to God. Our bodies became God’s Holy Temple, Jesus our High Priest, and our sins atoned by the Lamb of God—once and for all eternity. Thus the Ark is no longer relevant today.

RECOMMENDED READ:
History of Israel and the Jews, Christians must know.
Why is Israel hated by Nazi Germany?
Where is the Ark of Covenant today?

July 28, 2020
Previous articleMore Dangerous than Prosperity Gospel: Christian Humanism
Next articleOne-Verse On How To Respond To Social Media Bashers

Should We Condemn Ravi?

Is Repentance Requirement for Salvation?