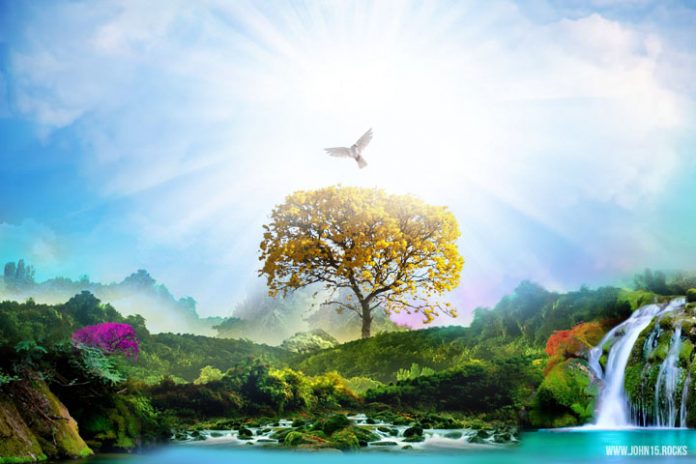 Bible verses that say Believers go to paradise immediately after death, to be with Jesus in heaven

Jesus answered him, “Truly, I tell you, today you will be with me in paradise.”

Other religions insist “today” is not literal because Jesus ascended to heaven 40 days after He rose from the dead. The word “today” (σήμερον, sēmeron) means precisely just that — daily, always, this day. (NASB)

Jesus is “Omnipresent,” He can be at any place at any time—He is God in one person, and the Father is in heaven.

→ What happens to Christians when they die?

2 Corinthians 5:8 – Christians who die are with Jesus.

We are confident, yes, well pleased rather, to be absent from the body and to be present with the Lord.

In v5-6, God gave the Holy Spirit as a guarantee for what is to come. That is why Paul was 100% sure that as long as we’re alive on earth, our spirit is away from Jesus.

Therefore, it is with certainty that when Believers die, they will immediately be with God. Christians should be happy with that rather than twist the Bible to support a religious belief.

→ What happens to atheists when they die?

Philippians 1:23 – Paul prefers to die to be with Christ.

I am torn between the two: I desire to depart and be with Christ, which is better by far.

Paul would rather die but he’s not done with his ministry on earth. He is torn between suffering on earth and being with Jesus in heaven. He said, “…to live is Christ and to die is gain.”

If he were to sleep in the grave after death (body and spirit), wouldn’t it be better if he lived longer to serve Christ? Clearly, Paul favored dying so he can be with Jesus in heaven.

→ Who is the greatest apostle?

Unbelievers and Believer’s body returns to earth as dust. But their spirits return to God (Ecc. 12:7). There are two judgments that await; for Believers (for their works) and final judgment for Unbelievers.

The spirit of Believers goes to be with Jesus in heaven. (2 Corinthians 5:8)

“Look, he said, I see heaven open and the Son of Man standing at the right hand of God… While they were stoning him, Stephen prayed, ‘Lord Jesus, receive my spirit…’ Having said this, he fell asleep.”

Clearly, Jesus was ready to welcome Stephen to heaven that moment. Stephen saw an”open gate.” He also spoke expectantly of Jesus welcoming him.

“He fell asleep” is a euphemism for the death of believers whose physical body remains on earth sleeping. The body is reunited with the spirit on the first resurrection of the body when Jesus returns.

→ History of the early church.

They called out in a loud voice, “How long, Sovereign Lord, holy and true until you judge the inhabitants of the earth and avenge our blood?”

→ Proof that Bible is God’s words.

Ecclesiastes 9:5 – People of the Old Covenant.

For the living know that they will die, but the dead know nothing; they have no further reward, and even their name is forgotten.

There are at least eight people in the OT who went to heaven, including Enoch and Elijah. People who died before Jesus’ death and resurrection were under the curse of death. [See Judaism]

But God so loved the world that He gave His son Jesus to “open the gates of heaven” for those who believe. Those under this New Covenant have this hope.

→ Why are the Israelite Jews hated?

1 Thessalonians 4:13 – Dead in Christ, before resurrection.

“But we do not want you to be uninformed, brothers and sisters, about those who are asleep so that you will not grieve as indeed the rest of mankind do, who have no hope.“

The point of 1 Thessalonians verse 13 is to comfort Christians who lost their “believing loved ones.” Hence “those in Christ” refer to those who died as a believer. Paul uses “sleep” as a euphemism to refer to them.

At this point, Jesus has not yet resurrected. When He did, Jesus went to the blessed side of Sheol (hell) and took believers (those in Christ) with Him to heaven (Ephesians 4:8–10).

“… and the dead in Christ will rise first.“

→ Which is the best Bible translation?

Paradise: The place of blessing where the righteous go after death. (Righteousness comes by faith in Jesus, Romans 3:22). The word paradise is synonymous with “heaven” (Revelation 2:7). It is a temporary place for martyrs, Believers*, those who have been set apart.

Believers: Those who believe and received Jesus as their personal Savior (Acts 4:12). They may belong to other religions, but their true faith is with the “real” Jesus. A New Heaven awaits all God’s children. (Rev. 21:1-22:5)

Unbelievers: These are atheists and agnostics. They were NOT saved by grace. Instead, they thought that keeping the law and good works will earn their way to heaven. For others did not hear the Gospel or rejected God’s gift of salvation.

First Resurrection: It takes place in stages (Rev. 20:4-6). The body of a “Believer” in the grave will rise and reunite with its soul and spirit (see verses below). With a glorified body, they will meet Jesus in the sky (Rapture) and prepare for His Second Coming. [Got Questions]

RECOMMENDED ARTICLE:
I need God; which one should I believe?
Basic Gospel apologetics for sharing the Gospel.
Not everyone is God’s child.

May 30, 2020
- Google Ads -
Previous articleRed flags of an abusive Pastor
Next articleImprisoned Saudi OFW forced to convert to Islam

How to know God’s will?