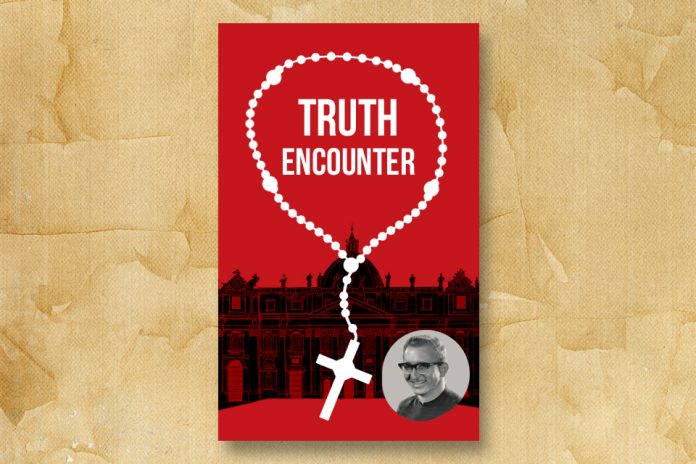 Steeped in Catholicism, Anthony Pezzota entered the seminary in Bergamo in Italy at 11-years old. Even though he saw conflicts between Catholicism and the Bible, he focused on his calling to serve God and was ordained a priest in 1961.

Fr. Pezzotta studied Philosophy and Greek in Rome but was cut short when he was sent to the Philippines and appointed as Director of Schools and Seminaries; and the Rector of the Salesian communities in 1964.

Father Anthony Pezzotta studied for fifteen years in Don Bosco’s Salesian seminaries in Italy, England, Spain, and Germany. He was not only a devout Catholic but well versed in dogma and catechism.

→ Is Catholic Mary same as Mary of the Bible?

Doubts in the Catholic Dogma

Despite a thriving Catholic outreach, Fr. Pezzotta experienced a kind of “faith crisis.” He knew something was wrong with the kind of faith taught by the long list of Popes in the Vatican. The only way to settle it was through God’s words in the Bible.

The more he read scriptures, the more errors he discovered in Rome’s teachings.

→ Errors of Rome by John Mccarthy.

He found himself attending a Baptist mid-week church service where he met Rev. Ernesto Montealegre. He did his best to convince the Pastor. “I did all I could to make him a good Roman Catholic,” Fr. Pezzotta said.

Instead, Rev. Montealegre illuminated Biblical truths that pierced Fr. Pezzotta’s heart causing him to suffer from more doubts than he could contain.

Freedom kept because of pride

Father Anthony was a model priest, admired for his dedication and character. However, the secret sin of pride prevented him from embracing the truth. He was more concerned with what his superior will say, how his students will feel.

After days of sleepless nights, despair, and fear, Fr. Pezzotta prayed unceremoniously for the first time. He asked Jesus to take over, for he knew not what to do. God responded by revealing to him his sin.

→ Gospel apologetics every Christian must know.

The Book of John

Surrendering it all to God, his eyes fell on the Book of John, and it pierced his heart like a double-edged sword. On February 20, 1976, he asked Jesus to be his savior.

John 12:42
“Nevertheless, among the chief rulers also many believed on him; but because of the Pharisees they did not confess him, lest they should be put out of the synagogue.”

The last words of the verse penetrated his heart and filled it with courage. Fr. Pezzotta felt true freedom to worship God. That night, he slept well. The next day, he drove to the Santa Cruz Baptist church.

Fr. Pezzotta and the Reverend Pastor discussed doctrines. He revealed his long-held doubts about the Roman Catholic’s “man-made traditions,” which was met with loving rebuke.

Before he left, Fr. Pezzotta asked, “In case I leave my church, can I stay with you? Will you accept me? The Reverend replied, “We have a room here; Believers will take care of you.“

→ Should Christians listen to Jordan Peterson?

The most important five days of his life as a priest

It took five days for Fr. Pezzotta to realize what he should do. After trusting Jesus, he decided to leave his car, the library he loved so much, friends, students, and left to live in the Baptist church in Santa Cruz, Laguna.

Anthony was baptized as a Christian Believer on March 3, 1974, at the Santa Cruz River. It was also in this church where he met his wife, Zita Vitangcol. She was a Sunday School teacher.

A priest visited Anthony and asked, “How did you decide in just 5-days. You left everything, all you’ve learned and loved.” Tony said, “I don’t think I left everything but found everything when I found Christ.”

I found everything when I found Christ

Tony completed his Masters of Divinity at the Denver Seminary in 1975. In 1991, Pezzota was awarded an honorary Doctor of Divinity by Western Seminary, Portland, Oregon, for his extensive knowledge of the Bible.

Blessed with three children, the Pezzotta couple ventured into missionary work for the next four decades.

In 1996, Tony Pezzotta wrote a controversial book, Truth Encounter. It was published in Spanish in 2004 as Encuentro Con La Verdad.

In contrast with Martin Luther and Loraine Boettner’s exposé, Pezzotta’s book is practical and easy to understand. His personal experience as a priest helped many in their journey of personal faith towards Christ.

Truth Encounter book aims not to destroy the Catholic faith but to echo Biblical truths that others twist.