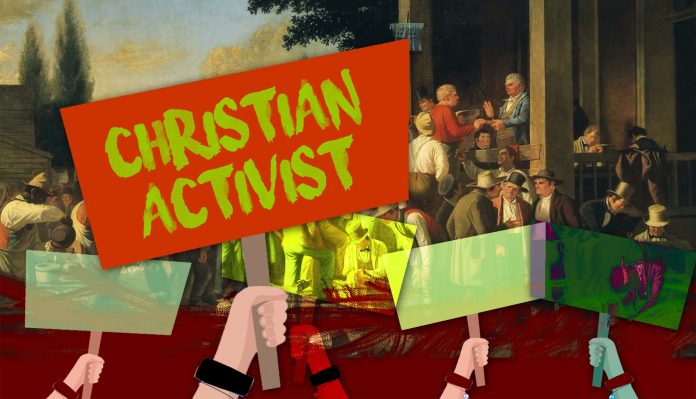 Catholics and evangelical leaders twist scriptures to claim social justice as Biblical. However, Jesus or the apostles never participated in political activism. It threatens the Gospel, and these activists are setting a bad testimony.

Political activism can be helpful in society; it’s a necessary voice, but it’s not the same as Biblical justice. True justice in the Bible glorifies God and encourages unity in Christ, not dividing Believers.

In 2021, the Evangelical Lutheran Church (ECL) ordained its first transgender Pastors. It’s reflective of how demonic doctrines infiltrated the church. If Satan could deceive ECL, we shouldn’t wonder why Christianity Today was seduced by counterfeit social justice.

As citizens of heaven, Christians are set-apart for a higher calling, not be an activist.

Social Justice is “Egalitarianism”: A fair and just relations between individual and society. There is a wide difference between a God-centered approach to social justice and a man-centered approach. Perfect justice will only come when Jesus returns. That is why Christians must focus on the Great Commission.

Ephesians 5:11-12 warns Christians to set themselves apart. Rebuke heathens and have nothing to do with darkness but convict them.

Proverbs 31:9 tells us to help defend the fatherless, widow, oppressed, just as Nehemiah did. But Christian activists misconstrue it to fit their social justice narrative.

These Bible verses are not about civil authority; neither does it encourage civil disobedience. Paul taught the opposite.

Unless authorities try to prevent Christians from worshiping God, the church cannot tell the government what to do. Take Jesus’ example in fighting the government; He did nothing. “Such resistance greatly displeases the Lord our God,” said apologist Chuck Swindoll.

Justice and righteousness are important to God. But even Jesus avoided entanglements because all authorities are accountable to God, NOT to men⁠—God will deal with unrighteousness.

When Egypt enslaved God’s people, He rescued them from systemic racism through Moses. However, chaos ensued amongst them. God sent prophets to judge them. In the end, God sent Jesus, and upon His second return, will true social justice come.

When the Apostles said ‘submit to the authorities and respect them,’ they asked the impossible. Roman authorities were abusive, and they were killing Christians!

Citizens of heaven fight to win souls on earth!

What did the apostles do to fight social injustice?

Bottom line, only the Gospel can bring social justice

God commands us to do good and help the needy. That’s a given. Christians can also rally behind organizations that fight for persecuted Christians without being involved in bickering.

What is better than activism?

Actively share the Gospel, the answer to society’s ills (John 1:5), said writer John Soulliere. Only Jesus can change the hearts of men.

Actively share the gospel, the answer to the ills of society.

Galatians 6:10
“We must work for the good of all, especially for those who belong to the household of faith.”

→ Should Christians rally against the government?

Do Christians Have Authority to Cast Out Demons?