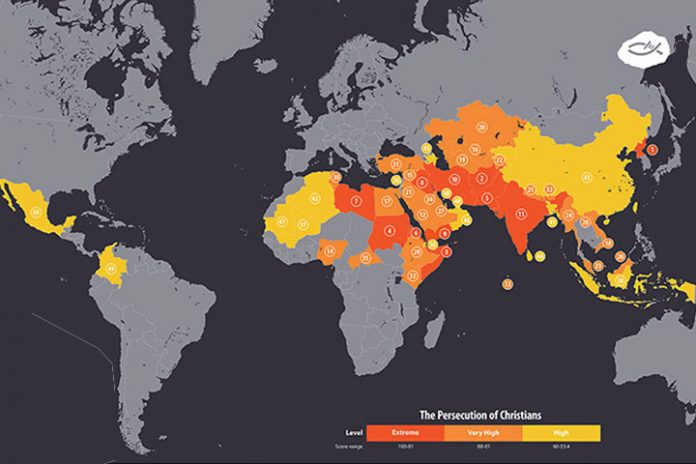 Satan’s first attempt to use politics to persecute Christians began with Madalyn Murray O’Hair, Steven Engel, and Ellery Schempp. They used the U.S. Constitution to declare prayers and reading of the Bible in public schools, violating the law.

Christian persecution and martyrdom in the world are much worse today than at any time in history, reveals ACN. An increasing number of Liberal-Atheists in the USA no longer hide their hostility towards Christians. Here are examples:

Christian baker Jack Philips was first sued in 2012 after refusing services to a gay couple. He was sued twice after the courts decided in his favor. In 2019, the case was finally dropped after evidence showed “ongoing hostility” toward religious freedom.

Just when you think it’s over, Phillips faced a third lawsuit over his refusal to make a “gender transition cake” this time.

The list of LGBTQ bullies grows, and politics is now used to silence Christians. In April 2021, photographer Emilee Carpenter fought liberal New York for its “public accommodation law.” The law makes it illegal to refuse service to anyone—even if her faith and values are compromised.

Carpenter refused to reply to at least seven requests from “same-sex couples.” If she refuses, the law can punish her with fines, jail, and losing her job.

US Democrats want to close churches

According to USA Today, left-liberal Democrats want to close churches, promote LGTBQ in schools, raise taxes, and pay for sex reassignment surgery. Other examples of Christian persecutions include bills that undermind religious freedom.

There is a group of American liberal politicians who are openly antisemites. They champion a deceptive climate change agenda and promote socialism and a victimhood mentality.

The original amendment was enacted in 1889, as part of a nationwide movement motivated by bigotry against Catholic immigrants, according to Eric Rassbach.

In 2015, three low-income families whose kids went to Stillwater Christian School filed a lawsuit against the provision. In 2022, the U.S. Supreme Court ruled in favor of Christian schools. [Carson v. Makin]

IS IT WRONG TO CRITICIZE THE GOVERNMENT?

In 2021, the United Nations tweeted a photo of the “Guardian for International Peace and Security” installed outside the U.N. Headquarters. The sculpture was grandeur.

The problem, Revelation 13 describes a similar beast in which the dragon (Satan) gave his power and authority to persecute followers of Jesus towards the end times.

The book of Revelation is a glimpse of what is to come, but the book of 2 Timothy summarizes the kind of millennial persecution happening. It is associated with the powerful political and demonic liberal influence sweeping many countries.

2 Timothy 3-6
“But know this: Difficult times will come in the last days. For people will be lovers of self, lovers of money, boastful, proud, blasphemers, disobedient to parents, ungrateful, unholy, unloving, irreconcilable, slanderers, without self-control, brutal, without love for what is good, traitors, reckless, conceited, lovers of pleasure rather than lovers of God, holding to the form of godliness but denying its power. Avoid these people!”