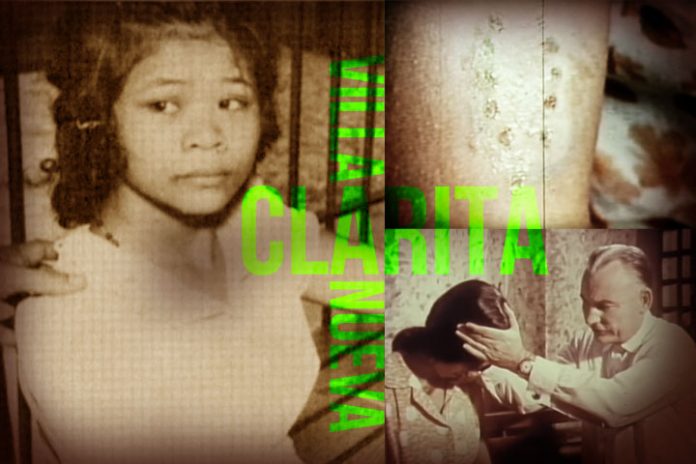 The Thing: The exorcism of Clarita Villanueva, the first documented demonic possession in the Philippines

Clarita Villanueva was an orphan from Bacolod. Her mother made money out of witchcraft and fortune-telling until she died when she was still young. Clarita felt unloved and decided to work in Manila as a maid in 1950. She eloped with a man who turned out to be married. She left him and became a club dancer.

Clarita decided to watch a late-night movie, and to walk home alone, police saw and arrested her for prostitution. She was jailed for vagrancy at the 300-years old Bilibid prison, where many people have died and suffered.

→ Richard Wurmbrand, imprisoned for 14 years for his faith.

On May 9, 1953, Clarita and the rest of the inmates were disturbed by pebbles pelted in the carcel. When she was about to sleep, ‘the thing’ perched on a beam, then jumped and sat on top of Clarita. ‘the thing‘ and another little creature began biting her. She screeched, and bite marks began to appear.

She described one as a 10-foot tall, dark man with curly hair all over the body, yet with an angelic face and a big mustache. She was only 17 years old and literary scared as hell.

Summoned at the Mayor’s office, Clarita sat beside the Mayor when suddenly, she laughed as if being tickled by someone then screeched in terror. She said “things” were taking turns to bite her. There were bite marks on her neck and hand that were still moist with saliva.

The Mayor himself restrained her hands, yet she insisted someone was biting her finger. When she asked to draw their faces, the pencil flew away. They sought help from the chaplain Father Benito Vargas, OP, but he only agreed to be an observer.

Doctors helped Clarita at the ‘Old Bilibid’ Hospital, but they too were at a loss. The news quickly spread after the Manila Police Department’s medical examiner, Dr. Mariano Lara, appealed for help through the newspaper. Villanueva’s story went viral, but only an “espiritista” came to help.

Dr. Ramos came to the prison to interview Clarita. He was a skeptic and accused her of acting to get attention. When he confronted her, Clarita gazed at him and very slowly said, “you will die…” The same hour the next day, the Doctor’s heart just stopped, and he died.

After the deliverance of Clarita, the Pastor warned the rest of the inmates to pray as well. The devils could attack them as well. However, a woman beside her cell made fun of the deliverance. As the demons came out from Clarita, she began to scream and became unconscious. Teeth marks appeared on her body.

Chief prison officer Captain Ganibi was Clarita’s custodian. Annoyed, he kicked Clarita. The day after Dr. Ramos died, she asked the captain for the small crucifix she often wore. The captain didn’t know where the cross was.

Clarita said, “It’s in your pocket.” The captain was stunned to find it and handed it back to her. Clarita cursed him to die. A few weeks after, the captain lost weight and died four days later, like a wilted plant.

The Crucifix and the Spirits: Clarita always wore a rosary. She would kiss the crucifix and caress it strangely each time Pastor Sumrall prayed over her. The Pastor realized that the crucifix has an association with the evil spirits and had it removed.
Although the crucifix is a symbol of Christianity, it also depicts a crucified Christ who has risen. The Bible says that we must not adore an image, even if likened from heaven. (Exodus 20:4)

The Pastor realized that the crucifix has an association with the evil spirits and had it removed.

→ Closing the door on the devil.

Protestant missionary Pastor Dr. Lester Sumrall was building the Manila Bethel Temple (known today as the Cathedral of Praise). He heard the news on DZFM radio, and God impressed in his heart to help Clarita.

Pastor Sumrall couldn’t sleep for three days and begged God to send someone else. Besides, he was busy building a church. “It was a very sad moment for me,” said Pastor Sumrall, yet he knew he had no choice but to obey.

Clarita was brought to the room where Lester Sumrall was. Suddenly, she screamed violently and said: “I hate you.” Clarita could only speak Filipino, yet she was able to hurl insults to Dr. Sumrall in English. The first day for deliverance seemed to have failed.

That evening, a newspaper said, “The Thing Defies Pastor.” Dr. Sumrall felt he needed to pray more and fast this time.

“Clarita, I have come to deliver you from the power of these devils in the name of Jesus Christ, the Son of God,” said Dr. Sumrall. Suddenly, Clarita became so angry and screamed, “No! No! They will kill me!” Then she fainted.

Afterward, the demons using Clarita began to curse the Pastor in the vilest possible way. They said they would never leave her. Later, Clarita became quiet. Everyone was tired, and in tears, they thought it was over.

After spending time in prayer and fasting, Lester Sumrall and other Christians began the day by breaking the bread and singing. As the battle resumed, they felt a sense of peace.

Dr. Sumrall declared, “In the name of Jesus Christ, I bind every power of the devil and command you to be free from this moment, in Jesus’ name!” Almost immediately, Clarita said, the demons left through the windows.

Everyone thought it was over when suddenly, the devils returned. Clarita screeched, and Pastor Sumrall asked, “Why have you returned? You know you must go and not return.” They said through Clarita, “But, she is unclean, and we have a right to live with her.”

Dr. Sumrall refuted them and said, “Mary Magdalene was unclean with seven like you, and Jesus came into her life, and she became clean by His mighty power. Therefore, I demand you now to depart, and Jesus will make her clean.” They left again.

Just when they were about the leave, the demonic entities returned but left for the third time. Carlita was worried, for she was sure the demons would come back once the Christian team leaves.

Pastor Sumrall taught Carlita what she should do. She can command them to leave through the blood of Jesus. “You must say, ‘Go, in Jesus’ name,’ and they will obey,” he said.

→ What happens to Christians when they die?

That night, Clarita gave a blood-curdling scream, “Help, they are back to get me! They are standing behind you!” she said at the jail guard. He was scared and hid at his desk. Clarita cried to the guard and asked if he remembers what the Pastor said she should say.

The guard said, “Say Oh God, deliver me in Jesus’ name and Jesus’ blood.” Then she went into a deep coma.

Authorities laid her on the table. They tried to open her clutched hands and behold. She appeared to have grabbed a few strands of coarse black hair. Dr. Lara took the sample and using a microscope. He realized it wasn’t from a human. It remains an unsolved phenomenon to this date.

When Clarita was finally healed and delivered, news reporters counted around 15 demons that left. Later, Clarita described the demonic beings as having long fangs with buck teeth in front.

She was transferred to a welfare facility and was soon released. She went back to the province, got married, and had her own family. The demons never returned.

The authority of Jesus over everything

Pastor Sumrall did NOT use holy water, salt, or a crucifix but depended on Christ alone. A true Christian can rebuke a foul spirit in Jesus’ name.

Those who are “truly in Christ” cannot be possessed

Sickness, depression, and fear do not come from God but from the enemy. However, there are certain kinds of spirits that cannot come out by anything except prayer and fasting.” (Mark 9:29)

→ What Satan can and cannot do.

What the devil intended for harm, God used for good

Mayor Lacson and Dr. Sumrall became good friends. He supported the Pastor’s desire to preach in public and build a church. As the news of deliverance spread, Pastor Sumrall shared the story of healing in radio stations and many churches.

Hundreds of thousands of people came to know Christ and got saved. What the devil intended for death, God intended for the good of those who trust and believe in Him.

RECOMMENDED READ:
What happens to atheists when they die?