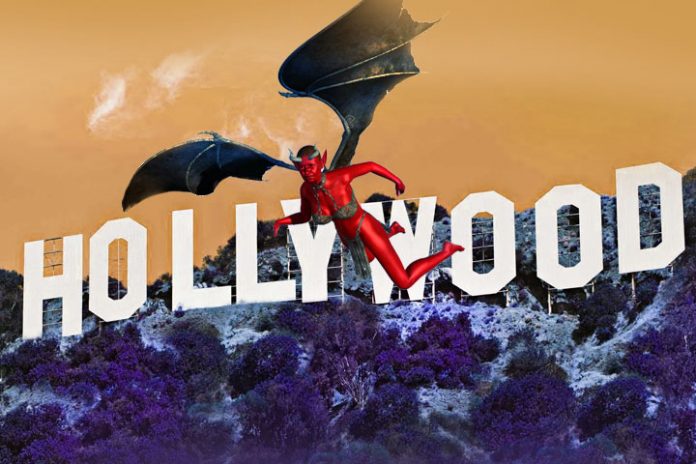 Since then, Hollywood’s world was plagued with a sex scandal, pedophilia, a nexus of witchcraft, Illuminati conspiracies, and a conundrum of ultra-left ideology.

Sex and the City was a famous American TV series that ran from 1998 to 2004. Its storyline, as the title suggests, is mixed with romance, comedy, and drama.

In ‘Sex and the City’ shared a billboard with rom-com ‘Friends.’ Promoters added pun, “Have sex with friends.”

Rolling Stones magazine said, “Miley was the one star in the room who truly understood what the MTV Video Music Awards (VMA) are all about!”

Robin Thicke’s mom said, “I keep thinking of her mother and father watching this. Oh, Lord, have mercy. … I was not expecting her to be putting her butt that close to my son. The problem is now I can never ‘unsee’ it.”

On January 25, 2016, Fox aired a Lucifer series. He was portrayed as a debonaire good guy who’s bored and unhappy in Hell. However, ratings were consistently low, and Fox canceled it after three seasons.

Netflix picked it up on its fourth season and received high ratings. Netflix renewed the series for a fifth season, released on August 21, 2020.

With no shame at all, Comedian Nikki Glaser discussed sex and her vagina on national TV. Of course, others like Jessi Klein share her sex life in the live audience in 2019. Mary Beth Barone talks about different kinds of vibrators and what’s best to use in 2021.

Christian Bale, who played Jesus and Moses in a movie, thanked Satan during his acceptance speech for the best actor. Ironically named “Christian,” Bale said, “[Satan gave] me inspiration for playing this role.”

Church of Satan tweeted on Sunday night. “As Mr. Bale’s own talent and skill won him the award, this is fitting. Hail Christian! Hail Satan!“

Bale starred in American Psycho, Batman Begins, Dark Knight, and Moses in the movie Exodus. Ironically, he played Jesus of Nazareth in Mary, Mother of Jesus, in 1999.

Michelle Williams won the Golden Globe award for Actress and delivered a moving speech about her pro-abortion choice. She said, “I wouldn’t have been able to do this without employing a woman’s right to choose.”

Glamour magazine called her “the best speech giver in all of Hollywood.” Author Ilyse Hogue who wrote an anti-Trump book said, it was a “beautiful testament.”

Anti-abortion activist Lila Rose, the founder of Live Action, tweeted. “No trophy is worth more than a child’s life. Sacrificing our children to pursue our dreams is the total antithesis of women’s empowerment.”

NetFlix “Christmas special” mockingly portrayed Christ as gay in a “dark comedy.” The Brazilian satire (A Primeira Tentação de Cristo) met with backlash ordered withdrawal from streaming. However, the Supreme Federal Court of Brazil overruled it in January 2020.

HGTV made history with ‘House Hunters,’ when it promoted polyamory or “throuple” on TV. It’s having intimate relationships with more than one partner, with consent. One of the partners, who is lesbian, finds the throuple appealing. Liberals call this relationship progressive.

Netflix Cuties is about 11-year-olds in a twerking dance group. Many said it hypersexualized and objectified young girls.

A petition called to cancel the movie. “This show is disgusting… viewing pleasure of pedophiles and also negatively influences our children!” says Alison Mitchel, who petitioned it to be removed in Change.org.

May 10, 2020
- Google Ads -
Previous articleThree major events in Jesus’ life
Next articleWhat you need to know about Hell