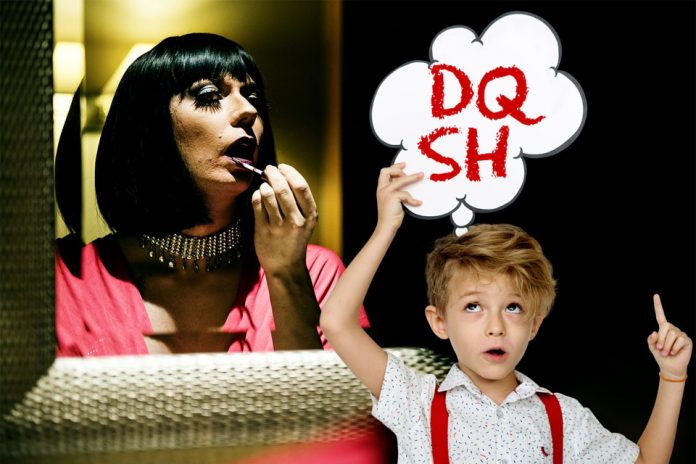 Drag Queen Story Hour (DQSH) in libraries, schools, invited as “models of diversity” to teach, entertain, educate kids about being a transgender person.

LGBTQ curriculum is Satan’s strategy that slowly forged its way into some public schools in the USA, Canada, and the UK. Although incidental, DQSH or Drag Queen Story Hour is its opening act. First introduced in San Francisco, it has spread like gangrene indoctrinating young children.

Its creator, Michelle Tea, came up with the idea after attending children’s library events traditionally hosted by “straight people.” She wanted to promote a more inclusive storytime and affirm LGBTQ families (kids with same-sex parents).

DQSH spread like wildfire, and “gay, transgender people” were given an opportunity to preach their gay curriculum at libraries, schools, bookstores, and museums.

How the DQSH “LGBTQ curriculum” is indoctrinating kids

1. Gay alphabet, “trans as a career,” twerking lessons taught by transvestites and transgenders

Nina West introduced the “gay alphabet” in 2020. In 2021, she became one of Nickelodeon’s gay endorsers. In another bizarre video in 2020, a transgender person teaches young kids, with their parents, “how to twerk.”

ARE WE BORN GOOD OR BAD?

According to KHOU, the Houston Public Library was forced to admit a registered child sex offender to participate in its drag queen reading program for kids. All done in the name of diversity and tolerance.

The library confirmed Tatiana Mala Nina, Alberto Garza, was convicted in 2018 for assaulting an 8-year-old boy. But the real tragedy was parents who cheered and laughed as they allowed their kids to absorb a subtle demonic indoctrination.

Parents were outraged after a professional Drag Queen was invited to a Middle School’s career day. The school wanted to show diversity in careers, and guests talked about their job.

Deceptive equality, diversity, and tolerance in America have reached their peak among millennial parents and liberal schools that allow gay indoctrination.

In 2017, an 8-year-old drag queen ‘Lactatia‘ said, “If your parents don’t let you do drag, ‘you need new parents.” His parents are supportive of him becoming a transgender star at this age. He also said anyone could do what they want in life.

Apparently, this is meant to encourage kids in Redbridge to pick up reading for summer, said Has Ammed on Twitter.

Apparently this is meant to encourage kids in Redbridge to pick up reading for summer. Please tell me the rationale behind these indecent costumes that were shown to families and done so publicly. Is this really necessary? @Jas_Athwal @RedbridgeLive pic.twitter.com/6I8DBcmDM3

Not all Drag Queens are amused, Kitty Demure rebukes parents

Not all Drag Queens are amused. A famous California transgender person, Kitty Demure, slams parents who bring their kids to DQSH events. She rebukes them with the following facts.

1. What the hell has a drag queen done?
2. Why would you want them to influence your child?
3. Drag Queens performs for adults with a lot of filth

Kitty Demure dissents. At the height of her anti-DQSH rant, Twitter suspended her account. Her conservative tweets labeled “harmful.” Mainstream media wants to shut her down. What DQSH teaches is a twisted form of gender diversity, which is Luciferian.

In 2021, Brave Books launched ‘Elephants are Not Birds.’ It’s an “anti-trans book” written by Ashley St. Clair that follows an elephant named Kevin and a vulture called Culture.

The vulture wanted Kevin to be confused and convinced him he was a bird, not an elephant.

IS THERE A GAY CURE IN THE BIBLE?