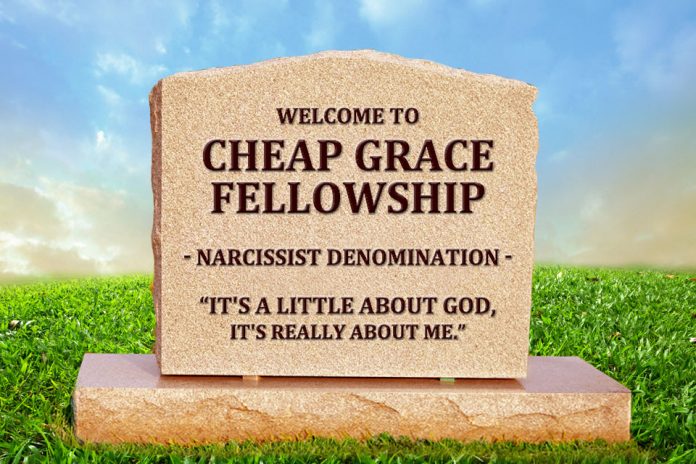 Salvation is FREE but not cheap—it cost Jesus His life

Cheap grace is preaching forgiveness without requiring repentance. It is baptism without church discipline; communion without confession; absolution without personal confession.

Costly grace is the gospel which must be sought again and again. It is a “free gift” which must be asked for, the door at which a man must knock. (Cost of discipleship)

Any person can claim to be Christian. A Christian whose nature has not been transformed, meaning he or she is still in a stage of carnality, is an impossibility. It cheapens grace.

Hypergrace believes that once we’re in Christ, we are totally no longer under the law, even in the instructive sense. But do we continue on sinning so that grace may abound? NO. Hypergrace is one of the greatest threat to evangelicalism.

Many people receive Jesus as sin-forgiver because they want to be guilt-free—not for the love of Jesus. They became Christians because they don’t want to burn in hell, yet they continue with carnality.

They don’t regard Him as more glorious, more beautiful, wonderful, or satisfying than everything else in the universe. They don’t treasure Jesus, cherish, or delight in him. They treat him as a therapeutic deity.

Examine yourselves to see whether you are in the faith; test yourselves. Do you not realize that Christ Jesus is in you — unless, of course, you fail the test?

Many people take Jesus as an accessory. If [following Jesus Christ] doesn’t cost you anything, it’s because you’ve bought into “American Christianity.”

This kind of “fake Christianity” is simply adding Jesus in your life to make it happy and fulfilled —this is blasphemy. Jesus is not just a ticket to heaven, not just someone who can bless your life. He is your life — He is everything. Jesus becomes our life!

RECOMMENDED READ:
What does it mean to be Born Again?
Most terrifying truth about the Gospel.

Who are you to judge others?