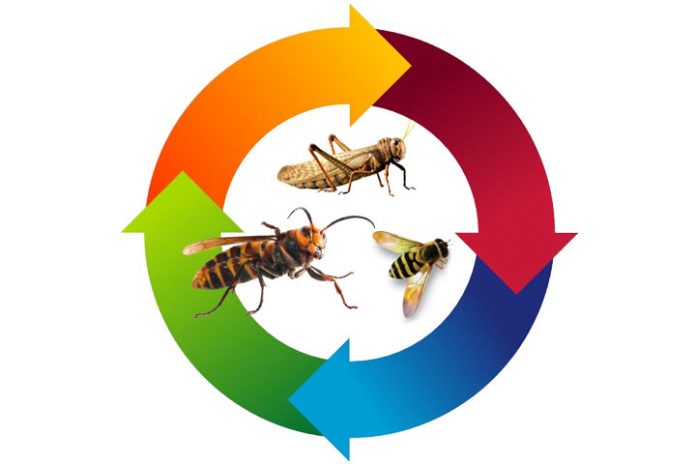 When Coronavirus began spreading in December 2019, an army of locust was wreaking havoc the same year. More disturbing is the continuous decline of insects that may impact global food distribution. Could this be the dawn of the “great famine” in Revelation or is it caused by humans altering the planet?

Asian Giant Hornets spotted in US soil for the first time

Invasive Asian giant hornets have arrived in the USA. Spotted in the fall of 2019, these “murder hornets” endangers bee farms. A swarm of giant hornets can wipe out a honeybee hive in few hours, decapitating bees and feeding parts of it to their young. [NY Times]

Last year, a series of locusts invasion hit the fields of Africa. According to the Locust Watch, a second invasion is imminent. UN is “extremely alarmed” as new and younger swarms arrive. The second invasion is 20 times worse. A swarm of just more than a third of a square mile can eat the same amount of food in one day as 35,000 people.

Flying insects population declined by 76% over the past 30 years according to research that began in 1989. There are also 15% fewer birds than just 14 years ago. Insects population is a critical equation of the food cycle. “If we lose the insects then everything is going to collapse,” according to Dave Goulson, team member behind the study.

Why this is critical to bees’ population?

One-third of our food comes from insect-pollinated plants, and the honeybee is responsible for 80% of that pollination says USDA. A decline in their population will affect the food cycle that can lead to famine. Revelations talk about famine and plague in the end times.

Bees are an important species on earth.

Equally worrisome is how the United Nations is saying that the insect decline and locust plague is caused by “climate change hoax“. Conspiracy has hounded UN’s Agenda 2030. If these occurrences are being used politically to promote the UN agenda, the greater threat is a coming new world order, that the Bible prophecied.

f these occurrences are being used politically to promote the UN agenda, the greater threat is a coming new world order

May 3, 2020
- Google Ads -
Previous articleScientists Who Say Evolution is Wrong
Next articleWhat Christian Pinoys can learn from Chinese Believers

People will love you today but hate you tomorrow