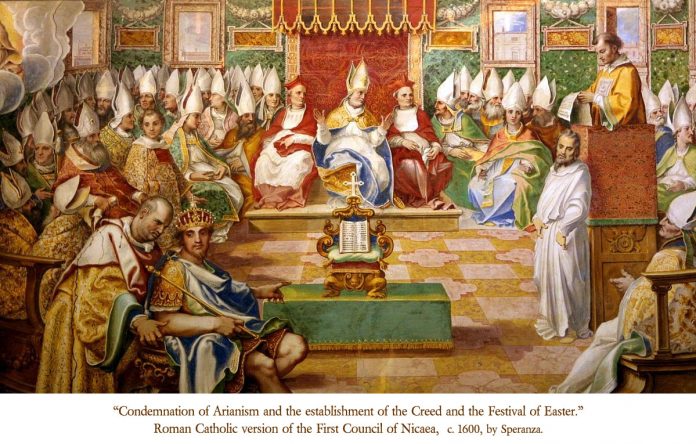 History of the First Church in Jerusalem

After Jesus ascended to heaven, Christianity emerged as a sect of Judaism. The first Christians were Jews called followers of “the Way” (ἡ ὁδός). The church was loosely organized. Eventually, it divided into two major “catholic” (meaning universal) factions in 451 and 1054 A.D.

The Five Sees: Churches established by the apostolic fathers

Naturally, the first church is the “First Church of Jerusalem.” Leaders were James the brother of Jesus, Peter, and John the Apostle (Galatians 2:9, Acts 1:13). The rest like Paul was on a missionary journey outside Jerusalem. (Acts 15)

RENAMING JERUSALEM: Around 135 A.D., Emperor Hadrian enraged by Jewish resistance he renamed Judea to Syria Palaestina (after the enemies of the Jews, the Syrians, and Philistines) and banished all Jews from the region. The Christian church of Jerusalem was forever lost. [Palestine]

Peter left Jerusalem after Herod Agrippa I tried to kill him. According to Eusebius, Peter asked James the Just (son of Zebedee brother of Apostle John) to be the leader in Jerusalem, hence the first bishop. Clement of Alexandria (150–215) also referred to James as the first Bishop of Jerusalem.

When James died in 69 A.D., historian Eusebius said, “Simeon of Jerusalem” (Symeon the Zealot) chosen as successor (second Bishop), shortly before the destruction of Jerusalem.

Antioch, the Cradle of Christianity

After Stephen’s stoning in 36 A.D., Some followers of “the Way” went to Phoenicia and Greek cities Cyprus and Antioch, spreading the word only among Jews.

They were called Christians for the first time in Antioch. The Holy Spirit called Paul and Barnabas to take the gospel beyond, making Antioch the early “missionary sending” church (Acts 13:2–3). The gentile converts spoke Greek critical in expanding the gospel.

The church Pillars: The first council of Jerusalem

The ‘Apostolic See’ are churches established by the apostles or their close associates. At least 25 churches were established during the apostolic age. Author Tertullian wrote in 180 A.D. four—Corinth, Philippi, Ephesus, and Rome (Jerusalem was destroyed in 70 A.D.).

List of early Christian centers during the apostolic years

From the early apostolic churches came three division of Christianity, all claiming roots from the apostles

Christianity’s presence in Rome by 40 A.D. was evident. Like most Christians in the ancient world, the Roman Christians were small Jewish and gentile groups that began in house churches. [Roots of Papacy of Rome]

Paul and Peter in Rome

Irenaeus of Lyons said Paul and Peter founded the Church in Rome. They appointed Linus (67 A.D.) as its first bishop. Paul sent to Rome in house arrest. From there, he trained church leaders (Acts 25:8-12). Tradition holds Paul beheaded in Rome as well as Peter, martyred in the city.

Early churches (Orthodox and Roman Churches) generally referred to as “Catholics.” Ignatius, Bishop of Antioch (108-149 A.D.) first used “katholikos” to describe the “universal church.” Hence, to say, “Catholic” includes the different branches of Christianity. One of them is Roman Catholicism.

Linus, the first Pope of Rome

Only the Roman Catholics (RC) affirm Apostle Peter as the first Bishop of Rome (Petrine theory). RC also misinterprets Matthew 15:18 to elevate Peter as vicar of Christ, making the Pope vicar of Christ as well—with no solid Biblical basis.

The Petrine Theory: A Roman Catholic doctrine on papal primacy, resting on Christ’s bestowing the “keys of the Kingdom” on Peter. They misinterpreted Matthew 15:18 to support their political supremacy. [Read commentary]

The earliest witness that Linus was the first bishop (Catholics call pope) was Greek Bishop Irenaeus of Lyon (130–202 A.D.). He wrote in 180 A.D. the following:

Important periods leading to the rise of Roman Catholicism

Rome as the ‘Apostolic See’ elevated to jurisdictional prominence because of its political importance amidst the dying Roman Empire. The Council of Constantinople held a political capital. [Jurisdictional authority]

As a result, Roman Catholicism grew in power and political dominance over its equal Bishoprics, whose churches were also established by the Apostles by tradition.

The great schism was the formal split between Eastern Catholics (Greek Orthodox) and Western Catholics (Roman Catholics). The word “catholic” means universal. They have similarities such as canonization, rituals, relics but differ in principle for the most part.

The Eastern Orthodox church in Constantinople* refused the need for two emperors to sit under the Roman Empire (Roman Empire was divided into Byzantine Eastern Empire or and Rome’s Western Empire which already collapsed).

The split between the Byzantine Empire (in Constantinople) and Roman Catholics (in Rome) gave way to the rise of Catholicism.

Constantinople was the seat of the Byzantine Empire. It was the Greek city of Byzantium. When the capital of the Roman Empire moved to Byzantium in 330 A.D., it became known as Nova Roma (New Rome) or ‘Eastern Rome.’ From Byzantium, it was renamed Constantinople after its first Emperor, Constantine I.

The Byzantine Empire still existed with its own patriarch. Hence, the relationship turned sour because the Western Roman church positioned itself above the other.

The Pope took the title Pontificus Maximus, the most important position in ancient Roman pagan religion.

The collapse of the ‘Roman Empire’ in 395 A.D. gave way to the Rise of ‘Roman Catholicism,’ which replaced it as a world power.

In 380 A.D., Roman Emperors Theodosius I, Gratian, and Valentinian II declared the “Nicene Christianity” the official state religion of the Roman Empire—known as the Edict of Thessalonica. The Pope, or “Bishop of Rome,” operated as the Roman Catholic Church’s head.

The collapse of the Roman Empire in the fourth century

As the empire disintegrated, the papacy took the title “Pontifex Maximus” (supreme priest). Such title belonged to the Emperors of Rome. The Emperor was the supreme religious head of the College of Pontiff. The Pope has taken that place.

→ Bible translation we can trust.

The Gospel was preached orally and written in Aramaic, Hebrew, and Greek languages. The Roman Catholic Vulgate came 300 years later.

In 382, Pope Damasus commissioned Jerome to produce a Latin version of the Bible from the various translations used. The Latin Vulgate was completed in 405 A.D., recognized as the official Roman Catholic Bible.

William Tyndale was responsible for the first English Bible. Like Jerome, he used the Hebrew, Greek texts, and other manuscripts older than the Vulgate.

In 1611, The King James Bible (KJV) was published as the Protestant’s own Bible. The Tyndale and KJV are NOT translations of the Catholic’s Latin Vulgate. [Bible translation to trust]

Tyndale and KJV are NOT translations of the Catholic’s Latin Vulgate.

The growing appeal of “Reformed tradition” gained momentum in the last few years. A fitting “resistance” to the growing threat of Moralistic Therapeutic Deism and Christian humanists—which are classified as non-denominational evangelical churches today.

RELATED BLOGS:
Which is the true church of Jesus today?
How the gates of hell did not prevail.
Main reason why Protestants separated from Rome.