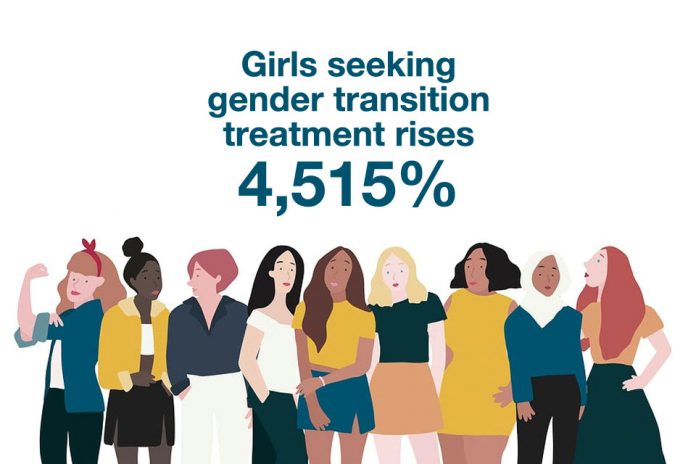 From 2009 to 2018, over 4,515 percent spike in teenagers seeking “gender transition” increased in the UK alone. Many academics, teachers, doctors encourage teens who doubt their sexuality that they are likely gay and that sex transition can save them.

In 2020, journalist Abigael Shrier wrote the book ‘Irreversible Damage: The Transgender Craze Seducing Our Daughters.’ She postulates that the surge is a result of social stimuli.

Although Shrier is not a Christian, she exposed Satan’s agenda of a new “Gender Ideology” that capitalizes on gender dysphoria.

Gender dysphoria is real, a rare condition until about 2007.

How a demonic ‘gender ideology’ is destroying the nuclear family

Before 2007, there was no extant scientific literature on gender dysphoria among teenage girls. Brown University Health Researcher Dr. Lisa Littman called it “Rapid Onset Gender Dysphoria,” published in PLOS One in 2018.

Littman suggested that parents reported that the spike in gender dysphoria appears to be in response to outward stimuli (social contagion) rather than gender identity. [PLOS One]

A survey indicated a sharp increase of seventh-graders identifying as trans as never seen before.

As a result of the contagion, young people are drawn to a liberal lifestyle, where anything goes and conservative values disintegrate.

2. The rise of “gay influencers” in 2017 debasing sexuality

Just two years after same-sex marriage became legal in 2015, groups of female friends in colleges, high schools, and even middle schools across the country came out as “transgender,” according to Shrier.

These are girls had never experienced discomfort in their biological sex until they heard a coming-out story from a school speaker or “trans-influencers.” They are thrall to hip trans YouTube stars and “gender-affirming” educators.

Social media has been blamed for the increase of teens wanting sex change. Most of them promote carnal clothing and cuss relentlessly like Filam influencer Bretman Rock. He was Teen Vogue’s cover and is setting a very bad example among teenagers.

In 2018, UK ministers were alarmed at the 4,515 percent rise among teenagers seeking sex change. Some girls as young as four years old want to change their gender. Social media are partly to blame. [UK Express]

In 2021, there are at least 90 YouTube gay influencers who have millions of subscribers. Their content is mostly about how wonderful living a gay life is.

What are puberty blockers? These are drug chemicals that shut down the part of the pituitary that directs the release of hormones catalyzing puberty. The most common is called Lupron, originally used to castrate sex offenders. It has never been FDA-approved.

5. Gender label in the USA today is based on pronouns, not on biology, thanks to democrat politicians

As of 2021, at least 86 medically approved gender labels have nothing to do with sex chromosomes, but feelings and inclinations. The left insists that he and she should be “they” or “theybies” instead to accommodate all genders.

In fact, Democrat lawmakers in California are calling to remove gender-specific pronouns.  Rules of the 117th Congress include changes to gendered language.

Just as the point of critical race theory is to turn the American people against one another, this gender ideology stops the formation of stable nuclear families—the building blocks of society.

According to Abigael Shrier, this is not the goal of all transgender adults is the goal of gender ideology and the transgender movement, creating a new victim class eager to join a revolution.

Combined with what left-liberal politics push, both “climate change scare” and gender confusion scare young people to build a family. They twist the definition of a nuclear family causing moral chaos.

Woke corporate America depicts kids with same-sex parents as a beautiful thing. Academicians use gay suicide to justify a militant execution of LGBTQ rights. And those who refuse to accommodate their ideology are charged with bigotry.

The point is, living the gay life or undergoing sex surgery does not work. Remember, after PRIDE comes destruction — Proverbs 16:18.

How to pray and talk to God