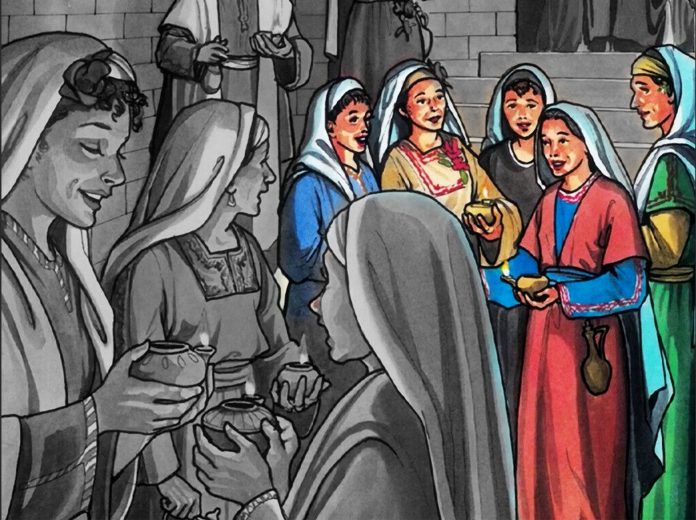 Interpretation of the Parable of the Virgins in Matthew 25:1-13 in relation to Jewish customs

Jewish wedding tradition has a lot of similarities with the Parable of the Ten Virgins in Matthew 25:1-13. The story is about the five wise and foolish bridesmaids waiting for the bridegroom. A celebration was about to take place.

Waiting for the Bridegroom

The wise women represent faithful followers of Jesus who waited but were ready for His second coming. The foolish ones represent lukewarm Christians.

The Bridegroom prepares the room for marriage ceremony

During Talmudic times (100-600 AD), the two ceremonies (betrothal and ceremony) were usually a year apart. The bride lived with her parents until the marriage ceremony, which takes place in a room or tent the groom prepared.

Interestingly, the bridge may not exactly know when the groom returns, it could be longer or shorter. Like the Bridegroom, Jesus returns like a thief in the night, which will be an unpleasant surprise for the foolish ones. (Revelation 16:15)

The marriage and wedding traditions of Sephardic Jews in the 16th century maintain the two elements. The betrothal (Kiddushin) and actual marriage (Nissuin). Today, these are combined into one uniform ceremony.

Then the Kingdom of Heaven will be like ten bridesmaids who took their lamps and went to meet the bridegroom. 2 Five of them were foolish, and five were wise. 3 The five who were foolish didn’t take enough olive oil for their lamps, 4 but the other five were wise enough to take along extra oil.

5 When the bridegroom was delayed, they all became drowsy and fell asleep. 6 “At midnight, they were roused by the shout, ‘Look, the bridegroom is coming! Come out and meet him!’

7 “All the bridesmaids got up and prepared their lamps. 8 Then the five foolish ones asked the others, ‘Please give us some of your oil because our lamps are going out.’ 9 “But the others replied, ‘We don’t have enough for all of us. Go to a shop and buy some for yourselves.’

10 “But while they were gone to buy oil, the bridegroom came. Then those ready went in with him to the marriage feast, and the door was locked. 11 Later, when the other five bridesmaids returned, they stood outside, calling, ‘Lord! Lord! Open the door for us!’

9-Bible verses that says “I am God’s child”