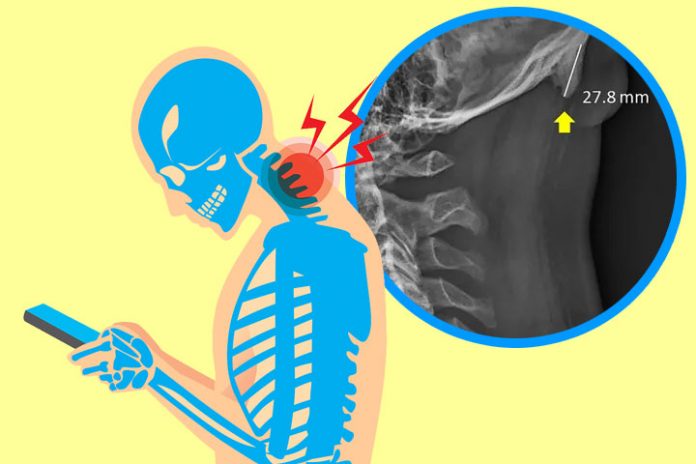 Hollywood celebrity Kirk Cameron shared his thoughts on Facebook on how technology is affecting teens. According to Kirk, major Apple investors (makers of iPhone) are now saying that the iPhone is toxic to kids. The investors are worried about the number of time kids are spending on their phone. Additionally, research shows prolonged use can cause “horns” to form in the skull.

The same is true across gadgets like Android and other social media platforms like Instagram and Youtube. A documentary-style movie “Connect” Kirk Cameron produced exposes the serious effects and what Christian parents can do about it.

Using smartphones for more than four hours each day may cause “horns,” side effects shows. It was discovered by Australian research scientists, David Shahar & Mark Sayers in 2018. The report said that the development of “prominent exostosis young adults’ skulls” emanating from the external occipital protuberance (EOP) was about 41%; 10–31 mm. It was evident from hundreds of x-rays examined. (Source: Nature Search)

Are you using your phone non-stop for more than 4 hours a day?

The study found 40% among 18 to 30 years old smartphone users who uses their gadget 4.5 hours on average, developed the horn-like growth. The reason was simple. When we use social media or play video games for hours, the body posture, muscular system, nerves, and tissue adjusts to the contour of the body.

Bone spurs are a tiny pointed outgrowth of bone. Interestingly, large enthesophytes (abnormal bony projections) are not seen in young adults. In addition, enthesophytes and osteophytes (projections in joint spaces) are bone responses for stress. In this case, a wrong posture can initiate stress and depressive symptoms. As a result, horn-shaped spurs may develop. (Biofeedback)

Technology is changing our body

The horn-like skull bump or “bone spurs” is not surprising, says Dr. Loren Fishmen of the Manhattan Physical Rehab. “Many overuse of the tendons inclines to calcification, the overuse and consequent inflammation brings about the calcification some of the time,” he said.

Texting and voice to text can limit the ability of these teens to read and write properly. “At ages 9 and 17, these kids are not getting enough practice to utilize the neurotransmitter the wiring is not utilized in the proper way of speaking,” says Clinical Psychologist Dr. Norman Fried. Likewise, smartphone texting are becoming colloquial, “We forget communication is not just through slang but important eye contact,” says Dr. Fried.

FURTHER READING
→ Gifts you should not but for kids below twelve
→ The seven promises of that one true friend?
→ A critical hour to help the youth

Are we born good or bad?