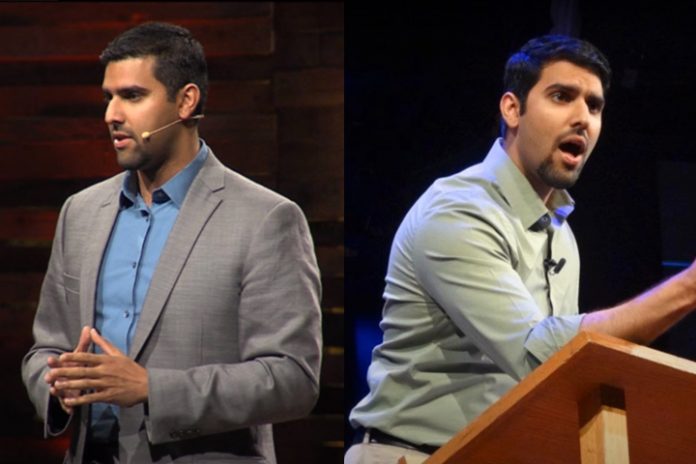 Nabeel Qureshi was born in 1983 at San Diego, to Pakistani Muslim immigrants. His father was in U.S. Navy, and they moved many times before settling in Virginia. His parents were proud of him because he walked in the ways of Allah.

He came from a line of Muslim missionaries, and Islam was his way of life. “It was my very being,” he believed he held the truth. He studied Islamic apologetics and engaged Christians in religious discussions.

Nabeel prayed five times a day and finished reading the Quran at five years old. At 18 years old, he went to Old Dominion University in 2001, where he met his roommate David Wood.

He has never seen anyone read the Bible, and when he saw David reading it, he said, “You do know its not the same Bible, it’s tampered…” Nabeel didn’t know David was an upcoming apologist, and he lived for those kinds of questions.

Although David and Nabeel debated a lot, they were best friends. David said he could test the Bible’s authenticity through “textual criticism.” Nabeel did his research and discovered that the Bible hadn’t changed all that much. He said:

“From the beginning, the Bible states that Christ is Lord; He died for our sin; Rose from the dead on the third day resurrected.“

It took about three and a half years of debating that Qureshi realized what Christianity was saying is true.

“… I love Allah; I love Islam, I love Muhammad, I love my parents, I love everything that I’ve ever grown up with, but that didn’t make it true.”

Show me the truth, God!

Although Nabeel learned many things about the Bible, he hasn’t fully understood what Jesus did, nor was he willing to surrender his Muslim faith just like that. Nabeel didn’t realize the repercussion of what he was about to ask God.

Vision of a thousand Cross

That night, Nabeel prayed. He was on his bed while his Dad slept across the room. There was a little bit of light, but as soon as he prayed and challenged God for a vision, everything became suddenly dark.

“There before my eyes were hundreds or maybe thousands of crosses, I was looking at them, and just as soon as they have come, they have gone.”

Nabeel Qureshi knew it was a vision, but he still refused to believe. He wanted more proof and so he told God:

“That can’t count, that might be just my eyes. Forget I asked for a vision, how about a dream, and if it confirms with what I saw in the vision, then I will become a Christian.”

That same night, God gave Nabeel the dream he dared ask God. In the dream, he was standing before a narrow doorway. His toes were precisely just before the door. It was about 3 feet wide and high enough for him to get through.

Dream of a great feast

At the other end of the door was his friend David sitting at a table. Within the room were hundreds of people sitting as well, getting ready to feast on what was on the table. However, people wouldn’t eat yet, because they were waiting for the host to speak.

In the dream, Nabeel asked David, “I thought we were going to eat together?. David replies, “You never responded.” Then the dream ended.

Nabeel knew what the dream meant. The room was God’s Kingdom, and he was standing outside because he has not responded to the call of Jesus. A few hours later, he called David to share his dream. David told him to read Luke 13:22-29.

Luke 13:24-29
Make every effort to enter through the narrow door, because many, I tell you, will try to enter and will not be able to. Once the owner of the house gets up and closes the door, you will stand outside knocking and pleading, ‘Sir, open the door for us.’ “But he will answer, ‘I don’t know you or where you come from.

Weeping and mourning for Islam

Nabeel wept and mourned, going to school for two days. He knew what he had to do and what might be lost for making a bold decision. Returning to his room. he looked at the Quran, “there was nothing to help me.”

He opens the Bible and what he reads comforts him, “Blessed are those who mourn, for they will be comforted,” Matthew 5:4 4. He read many other verses that pierced his heart with the sword of truth. Then he read Matthew 10:32-33 and felt so much anguish after.

Anyone who asks will be shown the truth

He realized at that moment that he could no longer deny the true God. “I have to accept Christ; I asked the Holy Spirit to change me. I felt electrocuted for about 10 minutes, and I was not able to move.” Afterward, he looked around, and suddenly, there was so much meaning in his life.

His whole world looked physically and emotionally different. Nabeel realized that his purpose in life is to praise the one true God and His son Jesus, and worship him with rejoicing because the Lord is near. He became born again!

“We have to tell people Christ is God! No man can find their way into heaven. It has to be by grace through Christ alone. The grace that Muslims are relying on is the same grace that Christians rely on. The difference is that grace has been given in the cross already.”

The most painful day for Nabeel

Before Nabeel came to Christ, David challenged him with this question, “If Christianity were true and it meant you had to give up everything to follow God, would you want to know the truth?.” Nabeel finally found the truth, and it was time to tell his parents.

It was the most painful day of his life to tell his parents he became a Christian. Equally painful was to see in his mother’s eyes the pain she had to bear. Islam was their whole life – there’s no connection anymore. Though he is free, he died that day in the eyes of his parents.

Nabeel joined Ravi Zacharias’ Internation Ministry. He preached everywhere with Ravi and called him “Uncle.” In the words of Ravi, “There was something transcendently different about him… He was a man who built bridges where ever he went.”

Everywhere he went, they wanted him back

Nabeel loved to eat, but this time, Ravi noticed he was just nibbling his food. He said, “Uncle, I have had some strange sensations in my stomach.” Ravi asked him to see a doctor, and the rest is history. He was diagnosed with late-stage cancer.

Few months before he died, he wished to join the ministry for one more trip. Despite his frail condition, they went to Malaysia in May. His passion was undiminished, and Nabeel gave a powerful message for the last time.

Returning to the God

Nabeel Qureshi died of stomach cancer on September 16, 2017, at the age of 34. He left his wife Michelle, and they have a daughter who was born in 2015. He left a legacy that has helped Muslims, Christians, and unbelievers to see who Jesus truly is.

Start A Fire in My Soul!