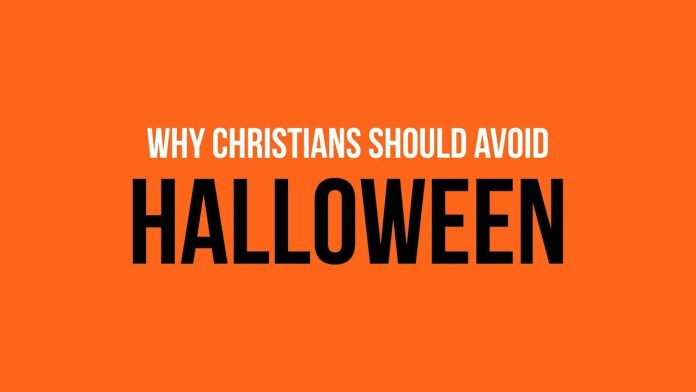 Church of Satan founder Anton LaVey said, “After one’s own birthday, the two major Satanic holidays are Walpurgisnacht and Halloween… I am glad Christian parents let their children worship the devil at least one night out of the year,” Lavey, Satanic Bible, 1969.

Likewise, ex-Satanist John Ramirez knows how demons operate on Halloween. “I was trained with high-rank devils,” he said. He warns everyone to stay out of Halloween.

In the USA, Americans would spend a record of $10 billion on Halloween 2021 and more than 180 million, primarily kids, participate in the pagan tradition.

→ Satan no longer hides in music.

1. Halloween is the devil’s holiday

Halloween began with a pagan and demonic ritual for Samhain, a Gaelic diety. It also represents the end of the harvest season and the “darker half” of the year. It was “Christianized” as All Saints Day by Pope Gregory IV. The Church of England renamed it “All Hallows Eve.”

The color orange is associated with the fall season when leaves wilt and die, while the pumpkin is related to the Ochun goddess. Warlocks worldwide celebrate this night by conjuring satanic attacks and curses to the community they are assigned to recruit souls, says John Ramirez.

2. Opening the door for demons

The pumpkin represents a demon called “Oshun” that controls rivers. It is a type of Jezebel in the Santeria religion. Oshun loves casting romantic spells. To ask for fertility, one must offer pumpkin and light candles.

Another legend related to the pumpkin is that of the goddess Ochun. She had a Calabaza (pumpkin) who she took care of, but it stole gold coins from her husband, Orunmila. Angry, she sliced Calabaza, and the stolen coins came out.

“Satan loves Christians who celebrate Halloween because it brings a 4 to 5 generation curse into that family,” says John Ramirez. When the door is open, demons can enter, and the curse is attached to family members.

3. Harvest is not a substitute for Halloween

Although the vegetable by itself is not demonic, the use of pumpkin symbolizes this pagan tradition. The roots of Halloween are the Samhain ritual, which is a pagan festival for the harvest.

Pagan origin: From October 31 to November 2, the Celts celebrated the Vigil of Samhain (pagan lord of the dead). He assembles the souls of those who died the previous year and decided what form it should take the next year. The soul can become human again or condemned to reincarnate into an animal. The evilest souls are assigned to cats.<br></br>To appease Samhain, they bribe him with gifts and prayers. Samhain also refers to mean the “end of summer” and traditionally has become a way to celebrate the “end of harvest.”

Pagan Samhain honors the dead. They believe some are resurrected while others are reincarnated. The reason for the “offering harvest for the dead.”

5. Witches and Warlocks come out on Halloween

During Halloween night, Satanists and occultists summons spirit guides to help them hone their magic powers. Others meet in covens and chant curses on people and areas within their territory.

When John Ramirez was still a warlock, he celebrated Halloween with people and literal demons alike.

6. Trick or Treat in reverse is “offering to Satan”

Satan has turned Halloween cute with kids in costumes. Trick or Treat has the same principle of Samhain tradition, where they gave gifts to the “lord of the dead. By appeasing the demon god, he will not reincarnate human souls to animals (such as cats).

John Ramirez prayed to the devils and offered animal sacrifices in return for favors.

Trick or treat, like pagans giving gifts to the lord of the dead.

→ Thinking words for kids to make them obey you.

What should you do if you practiced Halloween in the past?

Saint Paul warns us not to partner or participate with unbelievers, more so demonic elements, and have fellowship with darkness (2 Corinthians 6:14). Those deeply engaged in Halloween must renounce it through spiritual deliverance.

1 John 4:4
“You are from God, little children, and have overcome them; because greater is He who is in you than he who is in the world.“

RELATED ARTICLE:
The seven promises of Jesus to true believers.
Testimony of John Ramirez, Satan’s child?
Ghosts are real, but they’re not dead loved ones.

The gates of hell did not prevail