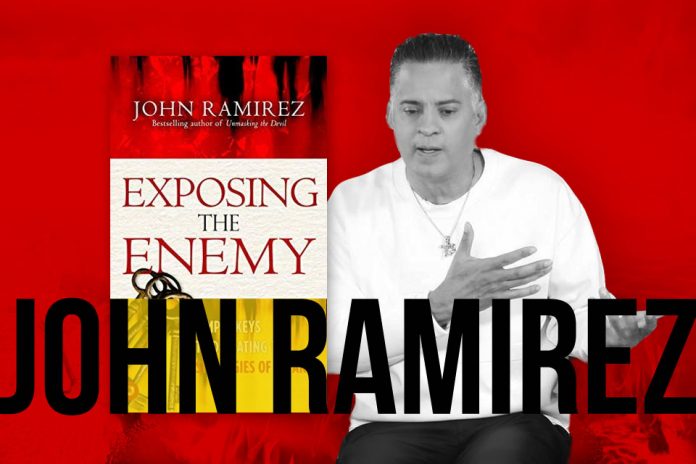 John Ramirez, dedicated to the devil at a young age, asked Satan to be his father

John Ramirez came from a family of witches in New York City. “When I was very young, I saw my Dad worship the devil. The devil came into that room, and my father spoke in demonic tongues from seven at night until five in the morning,” John said.

Ramirez had an abusive and alcoholic father. Unhappy, he prayed to the devil to have a different dad. Satan answered him, and at 33 years old, his dad was shot in a nightclub.

The devil took him out and told John, “I replace the old to keep the new, and the devil became my dad.” You have to earn your right to talk to the devil.

Witchcraft and magic is big business in America

Many people are drawn to practicing or getting witches’ services, thinking it can help make their lives better.

In fact, a spike in Millenial witches is out in the open, selling or offering their services on social media. Satan no longer hides.

John’s mother takes him to a tarot card reading

He was often sad, and her mother consulted a medium. She said the Santeria gods want John. He would go blind in 30-days unless they perform a ritual and offer him to them. They had to sell their furniture to pay the $250 fee for the ceremony.

They initiated John at 10 years old to the dark side

It was his first encounter with a real devil who showed up and took the offering. In the ceremony, they bathed John with herbs while he was blindfolded. They called five main demonic deities as they chanted words he could not understand.

Five different necklace beads were placed on him that represented five demons of various principalities. These five spirits became the guides of Ramirez. His life changed. It felt as if someone covered him with a thick black blanket.

Trained by his father the devil to become a powerful warlock, witches mentors Ramirez at 13 years old

Barely a teenager, he went to the Satanic church filled with devil worshipers. Witches and warlock taught John dark spells and magic from 7 pm to 5 am. He was taught details as to who owns certain regions and whose running a principality.

At 13, he was doing “astral projection.” His spirit would travel and would throw curses in certain areas. Ramirez called down the spirit of prostitution, homosexuality, murder, suicide. He was trained to channel these spirits into neighborhoods.

He can also cast spells for abortion, cancer, leprosy, and suicidal thoughts. His easy victims would be atheists because they do not seek God.

The biggest devil-worshiper in New York

When he turned 15, he became daring and went to hospital ICU and rooms, invoking death unto patients. He did all these to be promoted and become the biggest devil worshipper in New York city.

He also went to clubs and recruited people to witcraft. He lured them by telling them their past, what they did, and what’s going to happen to them. The devils coached him.

→ Father about to shoot his family: The Danny Urquico story

One day, John was watching the Jerry Springer show. Suddenly, he heard a voice that said, “Son, I am coming soon. What are you going to do with your life?”

Since then, a devil in human form would come regularly and keep him company all night. The demon sat across, teaching John black magic arts.

Warlocks worldwide celebrate Halloween by conjuring satanic attacks and curses to the community they are assigned to recruit souls.

He possessed powers from the devil

When John completed his lesson, he possessed powers. People respected him and were afraid of him at the same time. John Ramirez had authority and can do whatever he wanted. Satan became the father he never had.

Ramirez often talked to Satan. He calls him “My father,” and the devil answers, “What would you like to speak to me about? What is it that you want me to do?”

Ramirez got married on Halloween

Later, John Ramirez married a witch. Although he sent invitations, no one came to his wedding because people were afraid of him. Demons came from different places and principalities.

Demons led him to places where he needed to place curses to thwart people from hearing God’s words and be saved. He admits that in certain areas where Christians are, he could not penetrate it because of their prayers.

As part of Ramirez’s ritual, he was told by the demon to make a human sacrifice. He had a cauldron with nine machetes at his apartment. He also drank animal blood each week. If there were none, he’d bleed himself and drink his own blood.

He’d bleed himself and drink his own blood.

Casting a spell on a Christian believer

A woman asked John to put a spell on another woman her husband was allegedly cheating with. The price was $10,000. Ramirez consulted with his “dad,” the devil, and told him to buy 21 black candles and put a photo of the woman in a box. In 21 days, she will die.

Just before the woman left, she said, “This woman is a Christian.” When John heard it, he said, “I’d do it for free!” He hated Christians so much and sought to destroy them.

Months later, nothing happened to the Christian woman. Ramirez became worried about his reputation and consulted demons.

The devils showed up and said, “We have to abort the plan… don’t touch her.” We are no match for the God the woman serves.

John was invited to attend a Christian church by a girl who he liked. He went several times to please her. Unknown to him, God started moving in his life.

During a Sunday service, the pastor gave an altar call. Ramirez decided to go forward and wanted to commit himself to the one true God. He was not prepared for what happened next.

He thought the devil couldn’t get to him. After all, he was inside a church, a protected sanctuary. Suddenly, a demon grabbed John and threw him into the air. “I came for you,” the devil said.

Spiritual warfare inside the church

All the big men in the church tried to seize Ramirez, but demons threw people around like ragdolls. The congregations joined in prayer. About two hundred people got up and raised their hands to pray.

John knew that these demons could have killed them in a heartbeat, but he saw the power of God inside the church.

One of the men kept saying to John, “Say Jesus is Lord, say Jesus is Lord! say it, say it!” John eventually opened his mouth and said, “Jesus is Lord.” Everything stopped, and the devil left.

Everything stopped, and the devil left.

Surrendering his life to Jesus

John did not know how to pray, so he began to talk to God instead. He remembers his prayers like this…

I never want to be a Christian. I disown You if that’s going to get You away from me. I will worship the devil until the day I die. But if you are bigger than the ‘god’ I serve, show me tonight or leave me alone.“

Afterward, John slept and dreamt he was on a subway. The train filled with people with their faces drained. He knew they were going to a terrible place.

The train began to move faster than the speed of light, and a lady dressed elegantly started talking to Ramirez in demonic tongues.

Ramirez knew what the Lady was saying, “Traitor! you are leaving us.” John decided to step out of the subway but went into darkness.

“I went to the tunnels of hell. The heat grips you, and the fear ropes around you. There’s no hope. The hope removed,” he said.

John reached a particular part of the tunnel where he saw the devil who trained him. The devil became huge and said…

“I’ve been with you when you were nine years old. I’ve been a father to you. I have given you everything. I’m going to keep you here; if I can, you won’t wake up upstairs. You belong to me. You’re not going to leave. You know too many secrets of my religion.“

The cross of Christ

Just when John’s father, the devil, was about to grab him, a three-foot cross appeared in John’s hands. He couldn’t understand how a cross suddenly appeared in his hand; he never asked for it.

Ramirez placed the cross on the devil, and immediately, the devil lost its powers. It became like a helpless baby. The devil had no control over the cross Christ.

When John woke up, he realized Jesus is indeed LORD. He was a changed man. He knelt and prayed, and John gave his life to Jesus that day.

In a piece of paper, he wrote, “I’m a servant, a slave of Jesus Christ. I will serve you all the days of my life,” but the demons retaliated.

John threw out all of his witchcraft paraphernalia, but the battle was not over. He was under spiritual attack each night.

As John lay asleep, he’d feel someone’s hands grabbing his throat and trying to throw him off the bed. It was as if someone was ripping his soul away from his body.

At times, the demon would grab Ramirez by his feet. The bed shook and levitated towards the ceiling. John could not breathe or speak. He felt someone choking him.

He tried to speak the name of Jesus, but he had difficulty. When he was able to say, “Jesus, help me, save me,” the demons would leave.

Jesus, help me, save me!

John did not understand why God permitted the nightly struggles. He asked the Lord, “Why did you allow this to happen to me? Why this torment? Why did you allow these people to abuse me this way? I gave my life to You. I Told You I would serve you.”

God answered him and said, “I wanted to know how much you loved me; how much you trust Me.” Since then, the devils never showed up in John’s house ever again.

John Ramirez, from a warlock to becoming God’s child

“I’ve been victorious in Christ; I’ve got peace,” he said. His emptiness was filled with trusting Jesus. He became a child of God because of Christ.