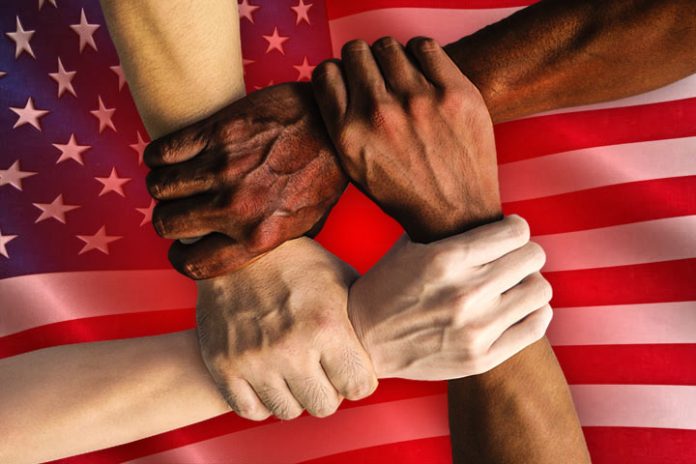 Black Lives Matter (BLM), created in 2013 in response to the repetitive police brutality. Blacks are often the target of “militarized police.” They want to defund the police, demand reparation, and economic justice.

Yes, “black lives matter,” but the group BLM also advocates atheism. Its leaders are “trained Marxists.” They practice witchcraft and summon the dead.

Their success in part is because of mainstream media and politicians who propagate systemic racism. Christian liberals also joined the bandwagon of pushing victimhood. Even Christianity Today magazine agrees with the faulty racial narrative.

BLM riots destroyed hundreds of private properties, statues of great men, desecrated soldiers’ memorials, and destroyed anything that resembles “authority.” Recently, they called for the destruction of Jesus’ statues, churches, and labelled it ‘White Supremacy.’ Meantime, some Pastors appeal to members to support the cause of BLM. (CT; Fox)

America is the best place for equality, diversity, and inclusion. Everyone has access to free food, education, and hospital benefits. Yet there’s so much Black poverty.

BLM blames it on systemic racism and police brutality that justifies the looting and assault of innocent people.

Like most conservative figures, Candace blames “Mainstream Media” and the destructive influence of far-left democrats. For her, the police brutality that ignited the riots is ridiculous.

In America, Black history is celebrated in schools. There are black Hollywood superstars, professors, doctors, policemen, lawmakers, and sports icons.

A Black President was elected twice. They even have their own Black National Anthem and ‘Miss Black America pageant.’ They have at least 17 Black holidays.

Yet they cry victims of systemic racism while politicians pretend to have compassion by helping them lower their standards.

"If you want to see the poor remain poor, generation after generation, just keep the standards low in their schools and make excuses for their academic shortcomings and personal misbehavior. But please don't congratulate yourself on your compassion."

3. Mainstream media perpetuates the lie that Blacks can never be good enough

Candace Owens, a Black American activist, wants to change her community’s mindset. She said in her Facebook post, “We allow our Black youth to be programmed by Satanic media that tells them they will never be anything…, MIGHT AS WELL lead lives of anger, crime….“

Well, a lot of what we know about social issues and politics comes from mainstream news.

Owens also ranted, “Because pea-brained celebrities that are idolized like [LeBron] tell young black men that they are ‘literally being hunted…’ a dishonest rhetoric.”

4. Black beligerance is destroying its own

Violence among Blacks-on-Blacks is phenomenally high. In South Chicago, where a huge population of Blacks sits, black shoots black daily. In 2020, at least 2,000 people were shot.

The riots and looting left a lingering stench that you can’t mess with BLM. That is a grim future for anyone faced with even more prejudice.

What Blacks can learn from Asians, Jewish minorities

The Jews best exemplify “positive group thinking.” Antisemitism did not break them. People spat on their faces, Hitler killed 6 million of them. The Jewish continue to face hatred.

Instead of blaming whites, Muslims, or Arabs, the Jews worked hard to flourish. Today, Israel thrives in a desert.

We are responsible for our actions as we are accountable to God as individuals. To move forward, we must let go of the past, and it’s only possible if we have the “mindset of Christ.”

We are responsible for our actions as we are accountable to God as individuals.

What does Jesus ask of you? Jesus commands us to “love one another,” which is a given. His followers have a higher calling – make disciples, teaching others to obey God (Matthew 28:19). If you want to make a difference to people who are suffering, share Jesus because only His love can genuinely transform people.