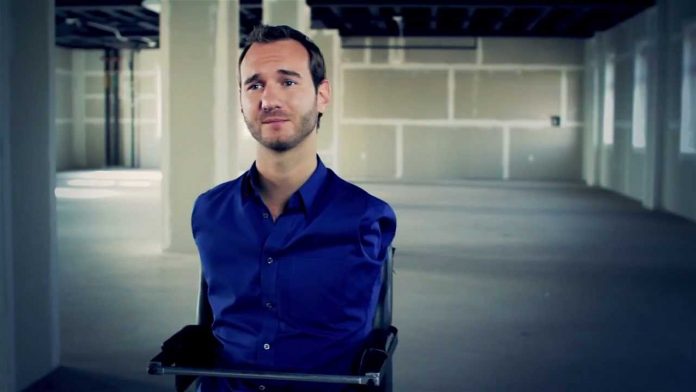 Why God, was I born this way?—the question Nick Vujicic wondered for many years. Born without arms and legs, he felt insecure and useless. Imagine getting through a busy day without hands or legs like Nick?

Having joy and fulfillment was elusive for Nick. Each day seemed hopeless. Thoughts of rejection and suicide filled his mind. He questioned God for seven years.

Imagine getting through your busy day without hands or legs.

Nicholas Vujicic (pronounced VOO-yee-cheech) was born with severe phocomelia in 1982 in Melbourne. The rare genetic problem occurs in 0.62 per every 100,000 patients, and Doctors have no idea why.

The ultrasounds detected nothing unusual. His mother, a midwife, was excited for her first child. She was 25 years old at that time.

Naturally, his parents were shocked when they first saw him. Nick’s mother said, “Take him away; I don’t want to touch him or see him.” His dad vomited, and his mom couldn’t hold him until he was 4 months old.

The early days were difficult. Nick dealt with the typical challenges of school and adolescence throughout his childhood, but he also struggled with loneliness and depression.

Nick constantly wondered why he was different than all the other kids. He questioned the purpose of life, or if he even had a purpose.

His mom couldn’t hold him until he was 4 months old.

→ Root cause of depression says the Bible.

Only when Nick had a serious talk with God did he realize he is loved. The Bible became his constant companion. Emotional healing began to take place that moment Nick trusted Jesus for his life and eternity.

“I am God’s creation, designed according to His plan for me,” he said. Nick’s unique challenges have allowed opportunities to serve the Lord that only he can deliver.

Family, friends, and people, he encountered inspired him to carry on, as well. Today, he is an author, musician, actor with hobbies like fishing, painting, and swimming.

“If God can use a man without arms and legs to be His hands and feet, then He will certainly use any willing heart!”

On May 20, 2013, Nick gave a special message during the inaugural S

Nick has this to say to young people struggling. “You have a choice. We can choose to dwell on disappointments and shortcomings. We can choose to be bitter, angry, or sad. Or when faced with hard times and hurtful people…“

“We can choose to learn from the experience and move forward, taking responsibility for our own happiness.”

January 17, 2017
- Google Ads -
Previous articleHistory of Palestine and Israel Conflict
Next articleThe Story Behind “Could You Be Messiah?” Penned by Freddie Santos