The true story of a prodigal husband, Danilo Urquico

Dad pointed a gun to his family, his son did this

From curse to curse?

Drug addict, drunkard, thief, rapist, carnapper, and murderer at 17. Juvenile behind bars. Teenage father at 18. Adulterous husband. One to be easily dismissed as a basket case.

An ex-convict for a father who deserted their family and ran off with his mistress after his prison term. Sins of the father sowing bad seeds on an impressionable, young son. A dysfunctional family, a far from ideal environment that shaped the rough-and-tumble life of Danny Urquico. Is it any wonder then that Danny turned out to be all of the above?

At 13 years old, Danny met and fell in love with Dawn whom he thought would be the stabilizing anchor in his wayward course. After five years of living together, they officially tied the knot, with Dawn’s strong conviction to make their relationship right in the eyes of God and men, having started her walk in her newfound Christian faith.

The “quiet” years of married life with Dawn were shattered when Danny got involved in several illicit affairs. Settling down obviously did not tame Danny.

Despite Danny’s reckless infidelity, like a true martyr, his wife stayed faithful to her vows, all the while drawing strength from the Lord. She diligently prayed for Danny and asked God to fill her with unconditional love for her husband.

Dawn clung to God’s promise and power to restore (2 Corinthians 13:9). Patiently and expectantly, she waited on the Lord (Psalm 27:14), trusting that in His perfect time, Danny will come to his senses and be transformed (Acts 3:19).

God, are You there?

Dawn’s relentless prayers, however, seemed to bounce back from the ceiling. Every wife’s nightmare became a reality for Dawn. Danny left her and their two sons to cohabit with one of his mistresses. He was deceptively captivated by the other woman that he wanted an annulment so he could be free to remarry. Dawn chose to heed biblical counsel. She stood her ground without acceding to her husband’s demand.

Bent on getting rid of the obstacle, he pointed a gun at his family

But Danny wouldn’t have it any other way. Bent on getting rid of the obstacle, he pointed a gun at his family. Before he could pull the trigger, a strange thing happened. His two-year-old son burst into a fit of laughter. That distracted and disabled Danny. He left with his family unharmed.

As if courting trouble, a rifle-wielding Danny shot a neighbor in the heat of an altercation. Missing a fatal blow, a criminal case of frustrated homicide was filed against him. He was reduced to a fugitive eluding arrest. It was then that he turned to his wife to seek refuge and help.

Not long after, Danny started to join Dawn for church activities. One morning at a prayer gathering, heaven broke through. God spoke and melted his heart. As the prodigal son came to terms with his Father in repentance and total surrender, all at once, his hurts were washed away. At last, he was set free from the prison cells of anger and bitterness. Suddenly, forgiving his earthly father came quite naturally.

“The thief comes only to steal and kill and destroy, but Jesus said, “I came that they may have life and have it abundantly”. (John 10:10) 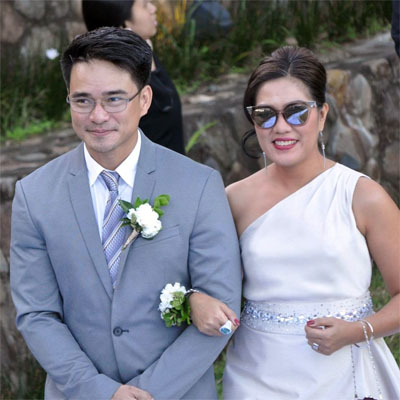 From Glory to Glory

That pivotal moment marked the beginning of Danny’s journey with God. The old self is gone; he is now clothed with newness in Christ. (2 Corinthians 5:17) Danny has transformed into a loving, faithful husband, an affectionate father, and a passionate, compassionate servant of the Lord. In 2005, he was commissioned as youth pastor of CCF East. Today, he is a full-time pastor of CCF Taytay and hub Pastor of CCF East.

The old self is gone; he is now clothed with newness in Christ.

The enemy meant evil against Danny, but God was able to use it for good (Genesis 50:20),  and transform a sinful man. True enough, a praying wife avails much!

– Can you relate? –
Take comfort that many have overcome obstacles in their marital relationship. If you need marital counseling, visit CCF, where Danny and Dawn go to church.

Get Daily TInapay devotional in your inbox!