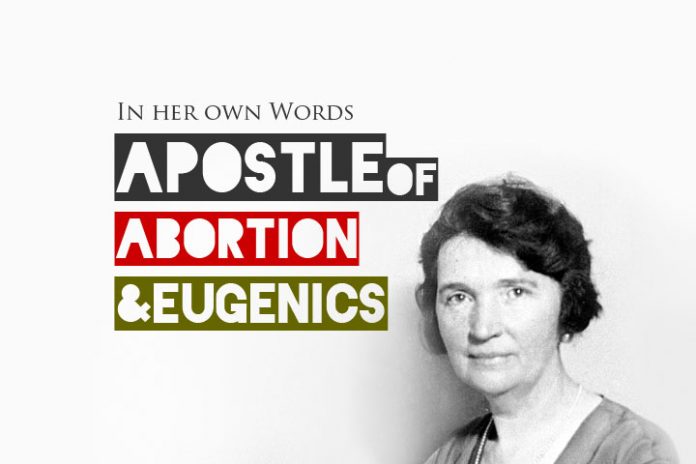 A militant pragmatist and Apostle of birth control, Margaret Sanger founded Planned Parenthood (PPFA) in 1916. Although she had children, like Hitler, she wanted to eliminate what she thought were inferior races such as Asian-Orientals, Jews, and Blacks. [LifeNews]

Born in New York to Catholic parents, her father, Michael Higgins, was also an activist. He was an atheist-humanist and free-thinker. Her mother died young after giving birth to 11 children, influencing her cause for national birth control.

Her crux is to eliminate the weaker race. She referred to them as “human weeds.” Although [the unreliable] Snopes said it’s false, numerous documents and interviews confirm her “moral evil” and “deceptive humanist” ideology.

“[Our objective is] unlimited sexual gratification without the burden of unwanted children…” REFERENCE: 1926 Birth Control Review via EWTN.

“Human weeds [Slavs, Latin, and Hebrew immigrants are]… a deadweight of human waste … [Blacks, soldiers, and Jews are a] menace to the race.”
REFERENCE: 1926 Birth Control Review via EWTN.

“No woman shall have the legal right to bear a child… without a permit for parenthood.”
REFERENCE: Article 4, “America Needs a Code for Babies” 1934.

What Adolf Hitler would say

“We don’t want the word to go out that we want to exterminate the Negro population.”
REFERENCE: Letter to Dr. Clarence Gamble on December 19, 1939.

The weak race are human weeds

“Birth control is nothing more or less than…weeding out the unfit.”
REFERENCE: Morality and Birth Control; Birth Control and the New Race.

Babies that shouldn’t have been born

[Referring to the weak race] “Human beings who never should have been born at all.”
REFERENCE: Eugenics Values

Having many children is a sin

“I think the greatest sin in the world is bringing children into the world.”
REFERENCE: Mike Wallace Interview.

“But in my view, I believe that there should be no more babies.”
REFERENCE: Margaret Sanger calls for a ban on childbirth in 1947.

What happened to Margaret Sanger?

Margaret Sanger’s life is celebrated mostly by Left-Liberals. She died of heart failure in 1966, and to honor her, PP began awarding the Margaret Sanger Award annually. Today, PP Abortion Clinics has more than 700 facilities in the USA with influence in 189 countries.