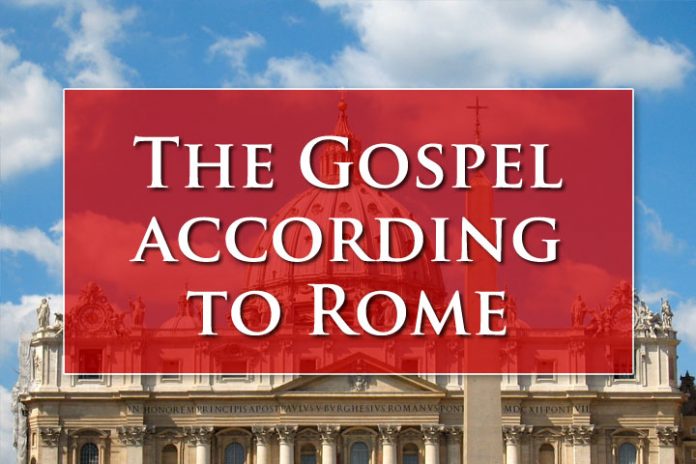 James McCarthy was educated in a Catholic school. When he came to Christ in 1975, he looked for literature to understand the differences between Catholicism and Protestantism, based solely on the Bible. Disappointed at what was available at that time, he did his own research.

In 1981, he produced a video documentary. “Catholicism: Crisis of Faith.” He published “The Gospel According to Rome” in 1995 and wrote other books after. He referred to Roman Catholicism as a “counterfeit Christianity.”

Of the world’s dominant religions, the Catholic, Muslim, and Hinduism believe that a person can attain heaven, peace, or paradise by doing good works. Faith alone saves. (John 3:16)

Good works are essential; a result of one’s relationship with Christ. However, penitence or indulgence has nothing to do with God’s gift of salvation (Ephesians 2:8-9). To insist on adding something to what Jesus did makes it “cheap grace.” Jesus said it is finished. (John 19:28-30)

A faithful follower of Christ will not choose to continue living in sin but daily repentance. A true Christian will “bear fruit” by abiding in Christ. (John 15:5)

Should infants be baptized?

Catholics believe that if a person or infant is not baptized by water, they will go to hell. Fortunately, there is abundant testimony in the New Testament that says faith in the Lord Jesus Christ precedes baptism. It is a declaration and symbolism of faith. (Read more: 35 Reasons why we do not baptize infants)

Venial and mortal sin, and the confession box

There is no venial or mortal sin in the Bible. “Sin is sin” in the eyes of a Holy God. Scripture is also clear that man cannot dispense forgiveness; only Jesus can forgive sins.

Catholics often quote and misconstrue John 20:23 to justify the confessional box. A careful analysis of the verse meant the disciples have the authority to pronounce that our sins “have been forgiven.”

As, and you will be forgiven (1 John 1:9). Penance (like reciting rosary) takes away the finished work of Christ on the cross. A deception of Satan that takes away our focus on Jesus’ saving grace. [Read more: CARM.org]

During the middle ages, priests dispensing forgiveness was a powerful political tool to control people into submission. This issue was one of the reasons Martin Luther wrote to the pope in protest.

The faithful bought “certificate of indulgence” for the salvation and forgiveness of sins of those who died. Historical record points to this practice during the middle ages.

In the apostolic constitution of Pope Paul VI, Indulgentiarum Doctrina 1967, responding to suggestions made at the Second Vatican Council, substantially revised the traditional doctrine’s practical application.

Purgatory, like many other Catholic dogmas, is based on a misunderstanding of the nature of Christ’s sacrifice. Catholics fail to understand that Jesus’ sacrifice was absolutely sufficient (Hebrews 7:27). During the middle ages, purgatory was used to justify indulgence.

AUTHORITY OF THE POPE:

According to the Catechism, by the alleged promise of Jesus to Peter, the Pope is preserved from the possibility of error. Hence, it justifies the Pope takes the role of Jesus as a shepherd, teacher, and vicar of Christ.

Catholic doctrine by the pope misinterprets the favor Jesus gave Peter in Matthew 16:15; Matthew 16:18 to justify false teaching and elevate the church.

Mary was earthly mother of Jesus

The Pope’s supreme apostolic authority allows him to define church doctrine without a Biblical basis. For example, to say “Mary the mother of God” who ascended to heaven—body and soul is an assumption by Pope Pius XII in 1950.

→ The “Catholic Mary” is not the mother of Jesus.

The Marian tradition of honoring her is has led to the “worship of Mary.” Although Catholics deny worshipping her, the catechism is enough proof. God desires us to honor him, not with repetitive prayers, such as the rosary. We are to worship Christ alone. (Mark 7)

The Lord says: “These people come near to me with their mouth and honor me with their lips, but their hearts are far from me. Their worship of me is based on merely human rules they have been taught.” (Isaiah 29:13)

If we seek the truth with all our hearts, we shall find it in Jesus.