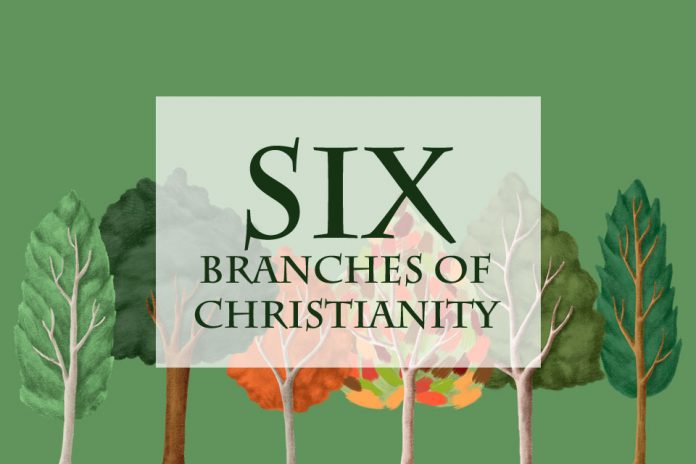 Traditionally, Eastern Christianity refers to itself as “Catholicos” while Western (Roman) Christianity, “Catholic.” Both words come from the Greek word katholou, which means universal or general.

Also called Eastern Orthodox who established themselves in Eastern Europe. Their seat of power was in Constantinople until it fell in 1453. The church remains today and they also have a pope.

Roman Catholicism was established when the Roman Empire was about to collapse. The influence of the emperors brought them clout and power. The pagan origin of the Roman papacy is rooted in the empire’s College of Pontiff.

Protestants are not a branch of Roman Catholicism. Although the founding fathers were former priests, they were excommunicated. Their teachings are rooted in scriptures (not Catholic dogma) and assert the fact that it is apostolic preaching.

An unintended breakaway from Roman Catholicism, Martin Luther wanted to reform the Roman Catholic church. His influence was confined in Germany but it sparked the reformation across Europe in the 1600s.

Examples: Several branches (in opposition among themselves) of Lutherans, Anabaptists, Baptists. Anglicans are associated with Protestantism, but rose independently.

A breakaway from Roman Catholicism, John Calvin, like Luther, wanted to preach the true Gospel of Jesus. He and Luther agreed on several reformed doctrines.

These are independent groups of churches that follow protestant tradition. They were mostly established between 1600 to 1900s.

Today, the popularity of apologists like R.C. Sproul, John Piper, and the late J.J. Packer triggered a resurgence of (strong or weak) Calvinism. They are generally referred to as reformed tradition.

Paul Washer’s “Shocking Message” on YouTube in 2002 on repentance and sanctification inspired a new movement of young reformists. [Tim Challlies]

Examples: Calvinist tradition, Arminianism. Although Methodist and Pentecostals are reformed, they are not Calvinists.

Various independent churches were established by a preacher or group whose teachings follow a combination of the protestant tradition and varying interpretations of scriptures by their organization.

Others refer to themselves as part of a Holy Spirit movement. However, many of them have opposing views.

OTHERS: Liberal, Progressive, and Ecumenical Churches

Generally, these churches claim Christian roots but do not necessarily follow the Bible in its entirety. Also called “progressive churches,” they focus on humanism and universalism. For them, Jesus is one of many ways to reach God.

Although Unitarian and Universalist churches are often associated with Christianity, they are not Christians. Other non-denominational churches like Mormonism, Iglesia Ni Cristo, and a host of other fanatic groups claim a new kind of apostolic revelation.

RELATED BLOGS:
Four branches of Christianity in the early centuries.
The true church of Jesus Christ.

April 20, 2021
- Google Ads -
Previous articleWhat it means to be “Righteous in Christ” in the Bible
Next articleWhich Religion is the True Church of Jesus that the apostles established?

Not everyone is God’s children?

Mundo by IV of Spades