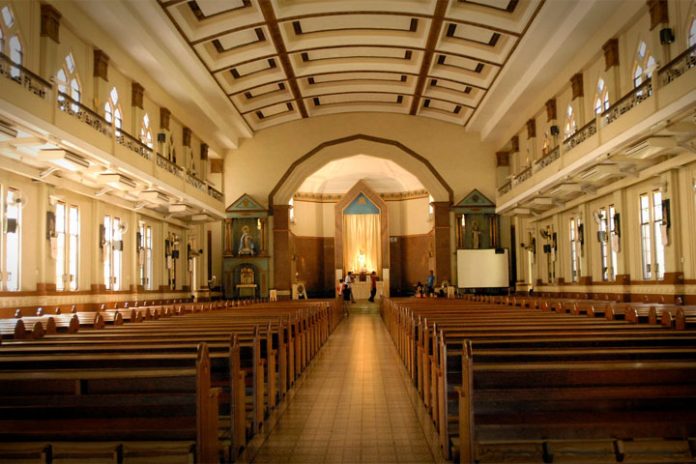 I was raised and baptized as a Roman Catholic. I studied at a Pontifical Catholic University and it was my daily habit to pass by the church, genuflect and say a prayer or novena. I had my scapular constantly and went to confession weekly so I can do my penance. I was also an acolyte and often went to the parish office to catch a glimpse of the holy fathers so I can kiss their hand. I also had the privilege of being one of the cadet guards for Pope John Paul. Clearly, I was a devout Catholic.

Is the God of Rome discriminate?

It was a daily ritual for me to pass by Santisimo Rosario church every day to pray. In one afternoon, a Spanish priest tapped me on the shoulder and with piercing eyes rebuked me for entering the church while wearing my athlete’s uniform. He said I should respect the house of God.

I stepped out of the church confused. Something switched on that day and began to see the hypocrisy of my religion. Later in my adult life, I began to question things like repetitive prayers, the intercession of Mary and the saints and confessing to a priest.

I began to question a lot of things

From Catholicism to the trap of New Age Enlightenment

As a young man, I began to seek “enlightenment” through other religions. I found myself joining the Rosicrucians, the Maharishi, and Chinese Buddhism. I practiced transcendental meditation and was very much into the new age movement. I wanted some kind of God in my life so I can seek material blessings. I do not understand then, but I also felt that if I die, I was going straight to hell.

I sought fortune tellers but realized that the power they possess is from Satan. I realized that those amulets, benevolent spirits, and spiritual meditation I sought did not have effect or power at all. If any, they were blinders that led toward pagan worship and ultimately Satanic practices.

Hearing the Gospel of Jesus

Although I still attended mass, the idols inside the church began to bother me. I chose to pray near the altar cross of Jesus and often found myself crying, desperate for God to fill the void in my heart. I felt God heard me but I couldn’t give all of me.

I first learned about Jesus when a college best friend shared to me the Gospel. Although I believed all he said, I refused to fully surrender my life to Christ. I continued to live a sinful life and with a new found relationship that I thought would make me complete, it went awry instead. I was at the lowest point of my life and going out with friends helped. However, coming home each night was dreadful, I was lonely and breaking inside.

→ Depressed? you maybe suffering from Anhedonia

I knew the Lord was calling me to abandon my sinful ways and I sought Him by looking for spiritual counseling. I came across ‘dial a friend’ hotline which helped for a while. Back to desperation, I received a message in my pager that asked me to call a counseling number. I called and the person whose name was Mike Tan, from Jesus is Lord church, and he said he never texted anyone and I must have the wrong number.

Then things changed as he sensed I needed help. The Holy Spirit began to intercede between us. He said that an angel texted me. Then he felt God was sending me a message and he quoted Psalm 139:13. Immediately, I felt a thick dark veil lifted from me. At that moment, I knew I was valued in God’s eyes, I am His child!

I met the person who counseled me in their Christian Church, but I didn’t feel I fit it. I decided to join a Catholic charismatic group instead. I thought I found my new family until I saw the hypocrisy of some of the members. Then I heard a sister promoting the veneration of Mama Mary, which to me was a form of idolatry. I do not believe that the Mary of Catholics is one and the same as the Mary of the Bible.

I was desperate again and came across Telemensahe where I sought prayer and counseling. I was invited by Pastor Roderick Rodriguez of Crossroads Fellowship, a newly planted church where I eventually joined and grew in faith. I was baptized and trained in evangelism by its Senior Pastor, Paul Guimary. I was on fire and began sharing the gospel to anyone I met.

Being a Christian is not a membership to a religion

I was forced to attend a retreat with another church and although I repeatedly refused the free pass, I was forced to go because no one would take it. I found myself bored because I already knew the things being discussed. I asked God why the waste of time and money for something I didn’t need. On the last day, God orchestrated a heartbreak with someone I thought was my God’s best. I felt abandoned and alone. Then at the last hour, when the Pastor asked us to pause and pray, I began to cry uncontrollably and I didn’t know why.

With teary eyes half closed, I saw a bright light of a man in front of me. He repeatedly said, “I love you,” and nothing else. Like a soothing balm washing my inmost being. I felt so much love and joy. After the short experience which felt like hours, I sensed that I was a new person and immediately ran outside to take a photo of the surrounding because it was as if the first time I saw earth. That day, I felt what it meant to be born of the spirit.

It was not the religion that changed me, it was the love of Jesus that is available to anyone who will accept His Lordship in their life. I was finally a born-again Christian!

April 28, 2018
- Google Ads -
Previous articleJoin a Support Group
Next articleWhat Perkins Twins did will spare you the trouble