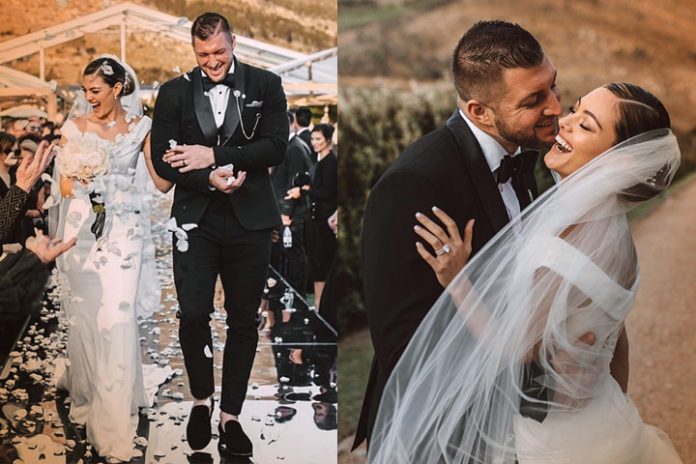 Tim Tebow is one of America’s best NFL players. He is also a motivational speaker, broadcaster, and book author. His parents were missionaries for five years in the Philippines, where he was born in 1987. They moved back to the USA when Tim was going four years old.

Doctors said his mom would have a difficult pregnancy, and it was best if Tim was aborted, but his parents Robert and Pamela refused. From the onset, Satan wanted to get rid of him.

Despite Tebow’s efforts to help the poor and be an example of right living, he was frowned at for his “tebowing” (different from Kaepernick’s political stint), and stand on “marriage before sex.” Satan tried to discourage him many times, but he kept the faith.

Praying for “the one“

At 32, Tim is arguably the world’s most famous virgin. He lost that title on January 10, 2020, when he married the 24 years old Miss Universe 2017, Demi-Leigh Nel-Peters. They were engaged for a year.

Tim Tebow prayed hard for “the one.” He was looking for someone with a strong Christian faith. “I’m looking, but I just can’t seem to find anyone,” he said in 2017, or so he thought. That same year, he met Demi-Leigh. Tebow and Nel-Peters are both Bible-believing Christians.

→ What you can learn from the Perkins Twins.

What young people can learn from Tim

Marrying his “God’s Best” was the second most crucial decision Tebow made in his life. The first was committing his life to serve Jesus. It wasn’t easy, he faced constant temptations, but he did it with God’s grace.

Tebow is a strong advocate for faith-based abstinence and has publicly stated that he had maintained his virginity. He kept himself pure against all the odds for “the one.”

In his book Through My Eyes, Tebow shared his struggles while in the book “Shaken,” he relates how our true identity in Christ can help us conquer life’s storms. His last book, This is the Day, aims to ignite your passion in life and part of that is meeting the “right one.”

I hate you son, I love you dad!

Is the UN United Nations, WHO, and Controlled by Satan?

Nick Vujicic questioned God for 7 years and His answer saved...