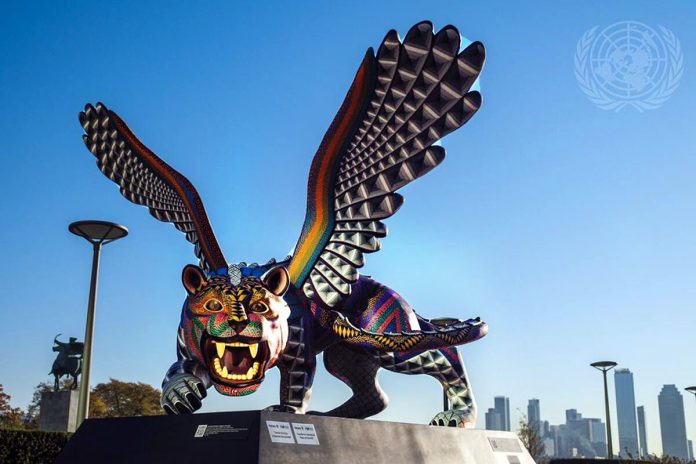 United Nations and Mark of the Beast in Revelation 17

Guardian for International Peace and Security

On November 9, 2021, the United Nations tweeted a photo of the statue of “Guardian for International Peace and Security.” It was installed at the Visitors Plaza outside the U.N. Headquarters.

The animal beast is a fusion of jaguar and eagle and donated by the government of Oaxaca, Mexico. Artists Jacobo and Maria Angeles designed the beast statue. Revelation 13 describes a similar beast who will persecute Christians towards the end times.

Revelation 13:2
This beast looked like a leopard, but it had the feet of a bear and the mouth of a lion! And the dragon gave the beast his own power and throne and great authority.

A guardian for international peace and security sits on the Visitor’s Plaza outside #UN Headquarters. The guardian is a fusion of jaguar and eagle and donated by the Government of Oaxaca, Mexico @MexOnu. It is created by artists Jacobo and Maria Angeles.
UN Photo/Manuel Elías pic.twitter.com/q8SSsQhz1L

The Scarlet-Colored Beast of Revelation Chapter 17

The scarlet-colored beast, described in Revelation chapter 17, symbolizes an organization whose purpose is to unite and represent the world’s nations. They each have rulers or kings. If Biblical observers are correct, the prophecy refers to the United Nations.

Revelations 17:2-7
The kings of the world have committed adultery with her, and the people who belong to this world have been made drunk by the wine of her immorality.” So the angel took me in the Spirit into the wilderness.

There I saw a woman sitting on a scarlet beast that had seven heads and ten horns, and blasphemies against God were written all over it. The woman wore purple and scarlet clothing and beautiful jewelry made of gold and precious gems and pearls.

In her hand, she held a gold goblet full of obscenities and the impurities of her immorality. A mysterious name was written on her forehead: “Babylon the Great, Mother of All Prostitutes and Obscenities in the World.”

I could see that she was drunk—drunk with the blood of God’s holy people who were witnesses for Jesus. I stared at her in complete amazement.

The League of Nations and the United Nations

The objective of the League of Nations, which jumpstarted the U.N., failed to resolve the major political disputes. In WW2, the triumvirate of Winston Churchill, Joseph Stalin, R.D. Roosevelt was to fight evil dictatorship.

The league seems to have brought world peace, but in reality, they realigned the would-be global powers of America, Europe, and Russia.

China, which became a member in 1935, would take a few decades to become a world power. In 2021, China surpassed the U.S. as the wealthiest nation in the world.

The United Nations’ advocacy leading to a one-world government

There will never be peace until Jesus returns

Although the United Nations claims to fight oppression and promote world peace, many countries remain destitute, and war atrocities continue.

Ironically, the Bible says that there will never be peace on earth. Jesus said He came with a sword and will return to destroy the world and save those who belong to Him.