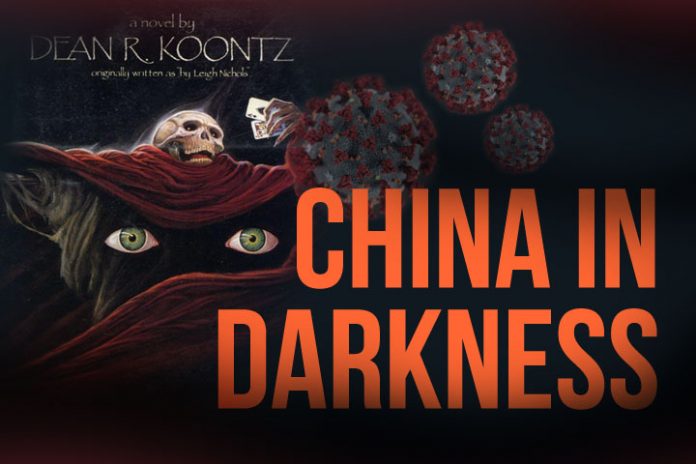 China in the Eyes of Darkness

In 1981, author Dean Koontz wrote the book The Eyes of Darkness. The thriller novel is about a Chinese military laboratory that creates a virus as a biological weapon. Interestingly, the lab is located in Wuhan and the man-made microorganism was called “Wuhan-400” as its namesake.

The novel also mentioned the fictional scientist Li Chen, who defected to the US and exposed China’s biological menace. Eerily, Dr. Li Wenliang also from Wuhan, was the first to tell the world about the Coronavirus.

Sylvia was an American author who claimed to have psychic abilities. Popular in her time, Browne’s book ‘End of Days‘ described what seems like the Coronavirus; “Around 2020, a severe pneumonia-like illness will spread throughout the globe, attacking the lungs, and resisting all known treatments,” she claimed.

Rumors of the US, Middle East, North Korea, and China preparing for biological warfare has been around for years. Naturally, speculations that the 2019-nCoV virus was manufactured can be considered. Interestingly, Wuhan’s Institute of Virology that studies the deadliest viruses is just 32 kilometers from the Coronavirus epicenter.

They do not fit the character of God’s prophets.

Like Joseph Mcmoneagle who was also a psychic, he prophecized the eruption of Taal Volcano in 2020. Both Sylvia and Mcmoneagle had other predictions that did not come true. Koontz, on the other hand, was a fictional writer. Surely, it’s a coincidence but we can take it as a warning, but perhaps not from God. They do not fit the character of God’s prophets.

→ What Pinoy Christian activists can learn from Chinese.

Beijing and Shanghai have become ghost towns for now. Coupled with HK’s turmoil, clearly, God has a message for China’s leaders. Although China is not mentioned by name in the Bible, some believe that the “kings from the east” in Revelation 16:12–16 refers to China.

Clearly, God has a message for CHINA’S leaders

→ Prediction of Taal volcano eruption between 2020-25.